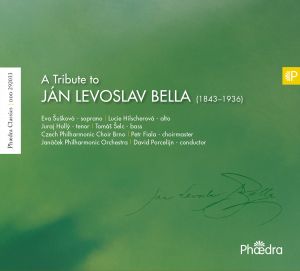 A Tribute to Jan Levoslav Bella

Phaedra
5412327292337 | PH 292033 | 1CD
Ján Levoslav Bella (1843–1936) was one of the most important Romantic Slovak composers, as well as a conductor and an organist.He studied theology in Banská Bystrica and at the Pázmáneum Jesuit University in Vienna. After his return to Banská Bystrica he was ordained priest in 1866 and he began teaching music at a seminary. From 1879 till 1881 he was the parish priest as well as municipal and eccelesiastic music director of Kremnica. At the age of 38 he moved to Transsylvanian Sibiu (Hermannstadt), to be Kapellmeister and teacher. He converted to Protestantism, got
married and brought musical culture to the German Protestant part of the town. In 1921 he moved in with his daughter, who lived in Vienna, But in 1928 he moved back to Bratislava (Slovakia), where he lived until his death on May 25, 1936.

Why Phaedra is recording work by Slovak composer Ján Levoslav Bella What Peter Benoit did or Flanders, Ján Levoslav Bella did for Slovakia.
Bella was four years old when Mendelssohn died in 1847, and died in 1836, exactly one year before our (Flemish) composer August de Boeck.
Bella is highly estimable Romantic composer, who contributed works to in all musical genres. He wrote both religious and secular music: symphonic and chamber music, opera, and songs. He developed a style of his own, which laid the foundations of what was to become Slovak national music.
Thanks to his long and very busy life he exerted considerable influence on several successive generations of his compatriot composers. But just like Benoit’s, Bella’s work was unjustly ignored after his death. Since Slovakia separated from the Czech republic, Bella’s importance has been finding recognition and indeed appreciation. He provides the country with the musical identity it craves. Since 2015 the major Slovak cities have annually organized festivities and concerts to give Bella the recognition he so richly deserves.

This edition is a world premiere in all respects, and it has received the greatest care. Not only one of the best Czech symphony orchestras, but also one of the world’s best choirs participated in its production. These forces are under the baton of renowned Dutch conductor David Porcelijn, who has a reputation as a musical pioneer. Time and again he promotes unknown and/or forgotten works. It was Porcelijn, for example, who reestablished
the international reputation of the symphonic work of the once despised Dutch composer Hans Badings (1907–1987). The recording was supervised by the Slovak recording engineer Jaroslav Stranavski, to whom Phaedra also entrusted the same orchestra conducted by Ivo Venkov in music by Jef van Hoof and August de Boeck.