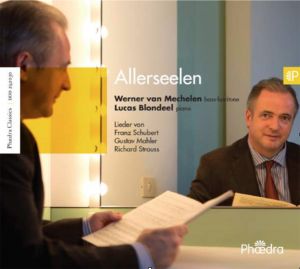 Phaedra
5412327292306 | PH 292030 | 1CD
Werner van Mechelen, bass-baritone
The scope of bass-baritone Werner van Mechelen’s musical activities is all-encompassing. On the one hand he has sung many of the major parts in the opera repertoire; on the other hand he loves lieder and oratorios. His repertoire starts with Telemann and Bach, and goes, via the major opera roles in Mozart (like Figaro and Don Giovanni), Puccini (Gianni Schicchi), Verdi (Falstaff, Aïda), Alban Berg (Wozzeck, Lulu) and Ligeti (Le Grand Macabre), to world premieres of works by Philippe Boesmans, among others.
One of his greatest loves is the German repertoire, most of all that of Richard Wagner and Richard Strauss. He has been Wolfram (Tannhäuser), Amfortas (Parsifal), Kurwenal (Tristan und Isolde), Alberich (Ring des Nibelungen); Mandryka (Arabella), Faninal (Der Rosenkavalier) etc.
Renowned opera houses in Europe regularly cast him, including Opera Vlaanderen, De Munt-La Monnaie,Opéra de Wallonie, La Fenice, Nationale Opera Nederland, Opéra Monte-Carlo and Gran Teatre del Liceu, as well as operas in Göteborg, Avignon, Straatsburg, Keulen, Zürich, Basel and others.
He has sung under the baton of Jeffrey Tate, Antonio Pappano, Marc Minkowski, Hartmut Haenchen, ...
In lieder, his repertoire is inexhaustible; it includes all major composers of lied and all major cycles, as well as works by lesser known composers, both from the past and contemporary ones. His discography of lieder is remarkably diverse. Among his accompanists are Jozef de Beenhouwer, Eric Schneider, Lucas Blondeel, Inge Spinette and Peter Vanhove.
Operas he has recorded on CD include Don Giovanni, Le Nozze di Figaro, Rheingold and Die Meistersinger von Nürnberg; on DVD, Le Roi d’Ys (Edouard Lalo), Don Quichotte (Jules Massenet) and Le Grand Macabre (György Ligeti).
Werner van Mechelen studied at the Lemmens Institute in Leuven with tenor Roland Bufkens and took master classes with Elisabeth Schwarzkopf, Dietrich Fischer-Dieskau, Robert Holl, Mitsuko Shirai, Hartmut Höll, Malcolm King, among others.
He was a laureate of a number of international singing competitions, such as the Queen Elisabeth Competition (Brussels), the International Vocal Competition ’s-Hertogenbosch, the International Singing Competition of Toulouse, etc.

Lucas Blondeel, piano
At only four years of age, Lucas Blondeel began to make music on a fortepiano (Boisselot 1834) that stood for sale in his parents’ art gallery. After his studies with Levente Kende and Heidi Hendrickx at the Royal Flemish Conservatory in Antwerp, he moved to Berlin in 2004 to study with Klaus Hellwig at the Universität der Künste, where he graduated with the Konzertexamen in 2012.
Lucas Blondeel was a three-time recipient of the Cantabile prize for young pianist and won first prizes at the Emmanuel Durlet International Piano Competition in Antwerp and the Kurt-Leimer-Wettbewerb in Zürich. He was a prizewinner at the Arthur-Schnabel-Wettbewerb in Berlin, at the Concours de Genève and at the World Piano Competition in Cincinnati. He also finished among the best six pianists at the acclaimed Concours Clara Haskil in Vevey and reached the semi-finals of the Queen Elisabeth Competition in Brussels. Lucas Blondeel has performed in recitals and as a soloist with orchestras on the stages of most European countries, the United States, Japan and Singapore. Recent highlights of his career include a concert in Suntory Hall (Tokyo), a three weeks residency at the Ravinia Festival’s Steans Institute in Chicago, a performance at the Deutsche Oper Berlin during a memorial concert for Dietrich Fischer-Dieskau, as well as performances during the Festivals of Schleswig-Holstein, Wolfsburg and Lucerne.
An avid chamber musician, Lucas Blondeel forms a piano duo with Nicolas Callot, a duo with clarinettist Annelien Van Wauwe and a Lied duo with Liesbeth Devos. As a Lied accompanist, he also performs regularly with Werner Van Mechelen, Hendrickje Van Kerckhove and Marine Schröter. He was greatly inspired by master classes with Helmut Deutsch, Wolfram Rieger, Malcolm Martineau, Irwin Gage, Thomas Hampson, Kiri Te Kanawa and Brigitte Fassbender. His passion for Lieder was rewarded with the prize for best Lied accompanist at the La Voce Competition of the Bavarian Radio in Bayreuth.
Lucas Blondeel spent many years studying historical performance and fortepiano with Jos Van Immerseel, Bart Van Oort and Malcolm Bilson. He strongly believes that the knowledge, feeling and experience of historical performance can have a great impact on modern piano playing and would like to play a role in bringing those two world closer together.
His recordings include a CD with the Schubert Impromptus (Klara), Für Marianne with music by Haydn (Cyprès), chamber music by Albert Huybrechts (Cyprès), as well as a recording of Lieder by Schubert, Strauss and Mahler with bass-baritone Werner Van Mechelen (Phaedra CD). His concerts and recordings are broadcasted regularly by Klara, Musiq3, NL4, HR2 and Bayern4.
Lucas Blondeel was awarded important scholarships from the Deutsche Stiftung Musikleben and the Studienstiftung des Deutschen Volkes. In the fall of 2012, the Akademie für Tonkunst in Darmstadt appointed him to lead a piano class.