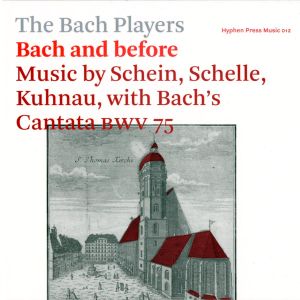 Hyphen Press Music
5060184830119 | HPM 012 | 1CD
When J.S. Bach was given the post of Kantor at the Thomasschule in Leipzig he joined a long line of musicians in this position, among them Schein, Schelle, and Kuhnau. This disc provides recordings of their treatments of texts that Bach would also set, and demonstrates the extraordinary strength and beauty of German church music of those times. It concludes with the first cantata that Bach wrote after his Leipzig appointment. ‘Die Elenden sollen essen’ is a master-work, notable for its virtuosic trumpet part. This is a show-piece, and a fitting debut for his work at St Thomas’s.

This is the twelfth and final CD in the series of Bach Players CDs from Hyphen Press Music. Together they form an unusual perspective on J. S. Bach and the contexts in which he can be placed in European music.