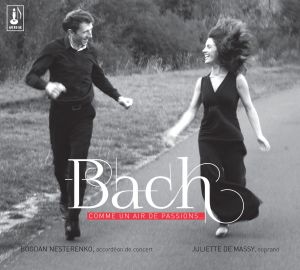 Ar Re Se
3760067550210 | AR 20133 | 1CD
Johann Sebastian Bach, both a composer and a virtuoso performer, grumbled all his life about bad instruments and players. He asked a tenor from his choir to replace the weak first violinist, but then didn’t have enough tenors...at the age of eighteen he brandished his sword
in the street to fend off a terrible bassoonist he had called «an old goat» during a rehearsal, and who was waiting for him afterwards with a stick...and three years before his death, when he visited Frederick the Great of Prussia, he rushed to play the King’s Silbermann fortepianos. So excited was he by their potential that he improvised fugues on themes given to him by those in attendance, which later became The Musical Offering. It is therefore easy to imagine Bach taking advantage of the accordion’s unlimited potential: its malleable and boundless dynamics, in direct contact with the bellows; its registers, comparable to those
of an organ; its sophisticated buttonboard, which allows for virtuoso playing; and its great musical agility, like that of a chest organ.
Of course, Bach would also have perceived the accordion’s limitations stemming from the dynamic uniformity of the right and left hands, but which a skilful player can offset. He might even have tapped Bogdan Nesterenko on the shoulder, asking him to put down his accordion and let him try out this amazing new instrument. And despite Bach’s incredible gifts, he probably would have handed it back quickly, after realizing how very difficult it is to play! The twists and turns of life led to serendipitous encounters with Juliette de Massy - I had the honor of accompanying her first steps as a soprano - and the accordion player Bogdan Nesterenko, upon his arrival in France. The idea of bringing together these talented young musicians for the ambitious Comme un air de passions... project was the natural outcome. Our commitment to dialogue and balance, the accordion’s capacities and the musicians’ favorites guided us in designing the program. And the reward for the three of us today, after all the hard work of putting the project together, is the dramatic force of Stumme Seufzer, still Klagen and the jubilant virtuosity of the Toccata and Fugue in D minor!
Performing Bach is a dream, a goal one can pursue for a lifetime. We had previously performed one or two arias, always with intense pleasure. But that was nothing compared to Comme un air de passions... an entire program to be recorded, an enormous task that called up a variety of feelings : enthusiasm, passion, misgivings... Could we really tackle such a monument? Enthusiasm won out!
We have attempted, with our instruments - a voice and a concert accordion - to convey Bach’s music: powerfully expressive, with beautiful flowing phrases and dialogues between the potent bass and the pure vocal line. We hope our reading - clear-cut and pure, yet committed, bypassing codes and fashions - will shed new light on this magnificent music, allowing the listener to better experience Bach’s emotional depth and strength.