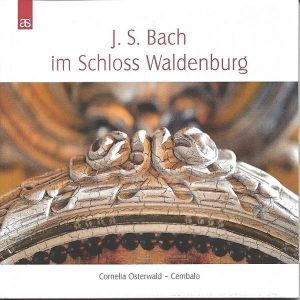 Bach: In The Waldenburg Castle

Avi
4260077710646 | AS 5064 | 1CD
The recording sessions took place largely in the library of Waldenburg Castle during the final days of summer 2013. They were inspired by the castle's quiet elegance and the magic of a venue still awaiting rediscovery.

The recordings were made in the library using a single-manual harpsichord from the workshop of Bernhard von Tucher. It was built in 2007 in imitation of an original by Heinrich Vater of Hanover (1738). It is a typically German baroque instrument with a touch of Italy, the wellspring of ideas during this age in European history. The instrument 'speaks' with a forthright and penetrating sound, making it possible to render the distinct articulation typical of baroque instrumental music. It thus does full justice to what Nikolaus Harnoncourt calls the 'musical speech' that Bach intended to achieve.