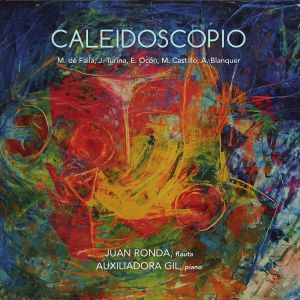 The word kaleidoscope comes from the Greek: Kalós (beautiful), éidos (image) and scopéo (observe). This recording was made with a view to bringing together a repertoire of a markedly Spanish character. It begins with a work be- longing to Spain’s “painteresque” music move- ment, in vogue at the end of the 19th century, with Memories of Andalusia by Eduardo Ocón; includes the Generation of ‘51 through two of its representatives, Manuel Castillo and Amando Blanquer; and also incorporates the nationalism of Falla and Turina. Original works for the flute and piano by Ocón, Blanquer and Castillo were selected, while compositions by Turina and Fal- la were adapted, respecting the original scores with the utmost care, through a sonorous kalei- doscope in which the music’s colour changes, without shedding its original beauty.

Manuel de Falla - Seven Popular Spanish Songs
These pieces, composed in 1914, constitute the last work composed by Manuel de Falla during his Parisian stage, before returning to Spain due to the outbreak of World War I. The soprano Luisa Vela performed at the premiere, accompanied by Falla himself on the piano on 14 January, 1915, in a tribute to Falla and Albéniz organised at the Ate- neo de Madrid (cultural centre). The melodic mate- rial is taken from the songbooks of Inzenga, Ocón and Hernández. In El Paño Moruno, the Seguidilla Murciana and Asturiana the original melodies are respected; the Nana (lullaby) and Canción feature an elaboration of the initial material, while Jota and Polo are based on the essence of Aragon’s traditional jota and of the flamenco variation, with their characteristic melodic scales and turns, mak- ing replication possible without having to resort to a real model. There is no tonal harmonisation of the melodies, a technique employed by other composers of the time. In these pieces, Falla, fol- lowing the counsel of Felipe Pedrell, derives the harmonisation from the essence of the melody. As he himself stated on several occasions, rather than the direct use of popular singing, the new nation- alism he promoted sought to borrow from them their signature rhythms and modal turns.