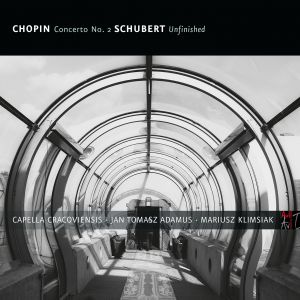 Period instruments from Poland CAPELLA CRACOVIENSIS was established in 1970 on the initiative of the then director of the Cracow Philharmonic, Jerzy Katlewicz, who entrusted Stanisław Gałonski with the mission to form an ensemble that would specialize in early music. Over the course of the years, the group has become organizationally independent, featuring highly diversified repertoire from the Middle Ages to world premieres of contemporary music. In November 2008, Jan Tomasz Adamus was named its executive and artistic director.

The repertoire of Capella Cracoviensis is thoroughly eclectic, ranging from Renaissance polyphony to Romantic operas, performed on period instruments and staged according to the guidelines of historical performance practice. With unswerving support from the City of Cracow, the band is able to bring its artistic ideas to life on a world-class artistic level, without compromises. CC is often invited to major festivals and concert halls, such as Bachfest Leipzig, Schwetzingen SWR Festspiele, Händel Festspiele Halle, Haydn Festspiele Brühl, Opéra Royal Versailles, Theater an der Wien, NOSPR Katowice, the Szczecin Philharmonic, and is frequently a guest in Brussels, Ghent, Lvov, Riga, Tallinn, Yerevan, Tbilisi, and Kiev.