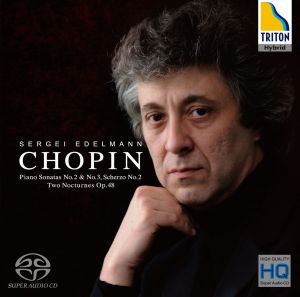 Exton
4526977930745 | OVCT 74 | 2SACD
This is a double CD filled with beautiful, grand Chopin works played by Sergei Edelmann, including the two sonatas composed at the height of Chopin's powers. Mr.Edelmann, a pianist sensationally returning to the recording market after his long silence, shows his maturity playing full of nuances, colors and expressions. Mr.Edelmann's mastery strokes are enough captured in the splendid recording by EXTON crew on the fine SACDs.

“Chopin composed almost exclusively for his own instrument, the piano – mostly in miniature genres, but three times in the more ambitious multi-movement form of the sonata. The First Sonata is a product of his student years, but the other two were written when he was at the height of his powers. Both succeed triumphantly in combining Chopin’s individual brand of virtuosity with lyrical melody and organic development – thanks in part to treatments of traditional forms which were once considered inept or even ignorant, but which are now recognised as perfectly calculated to achieve the composer’s expressive aims. […]

[...] Chopin borrowed the title of “scherzo” from the larger genres of sonata and symphony, and applied it, along with its associated triple time and A–B–A outline, to four free-standing piano pieces which far transcend the word’s literal meaning of “joke”. The Second Scherzo, composed in 1837 around the same time as the Funeral March of the Second Sonata, combines coruscating piano writing with an unusual expanding form.
[...] The title of “nocturne” was coined by the Irish-born composer-pianist John Field in the 1810s for a series of pieces featuring delicately decorated singing melody over a regular accompaniment. Chopin took over the concept, but in the course of his career broadened it considerably. For example, the first of the two Op. 48 Nocturnes which he composed in 1841 is not so much lyrical as dramatic in character […...] although the second of the pair is more characteristic of the genre, it has a sharply contrasting middle section, in a slower triple time with hints of mazurka rhythm – another example of the radical approach to form which is such a central feature of Chopin’s unique art.“