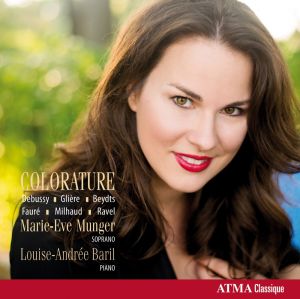 Atma Classique
0722056269223 | ACD 22692 | 1CD
With her pure voice, spectacular range, and dramatic flair, Québécoise coloratura soprano Marie-Eve Munger has rapidly built a solid reputation as a singer in high demand for prestige engagements around the world, including house debuts at La Scala di Milano and at the Aix-en-Provence Festival in a new production of Elektra by Patrice Chéreau. For her first solo disc with ATMA, Munger has chosen a program of French songs that call upon all of the resources of her dazzling and sonorous voice.

UpcominginternationalengagementsincludeL’EnfantetlesSortilègesatLaScaladiMilanoconductedbyEsa-Pekka Salonen in May/June 2014, and at the Opéra-Comique in Paris as Isabelle in Le Pré au Clercs by Hérold in 2015.