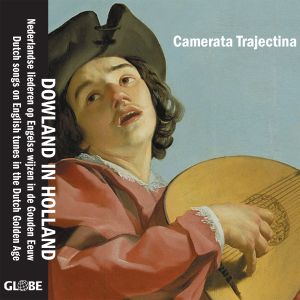 Globe
0608910526025 | GLO 5260 | 1CD
Dowlands ever popular First and Second Booke of Songs and Ayres didn't go unnoticed in the Dutch Republic and many a Dutch 'cover' of Dowland's appeared in the Netherlands. On Dowland in Holland Camerata Trajectina explores the English influence in the Dutch Golden Age (17th century).

DOWLAND IN HOLLAND
Dutch songs on English tunes in the Dutch Golden Age Much of the popular music of the Dutch Golden Age was imported from other countries, mostly from France, but also a remarkable amount from England. We’re talking here about how the Dutch youth in the seventeenth century sang their hot-off-the-press songs: Dutch texts set to English melodies. For Camerata Trajectina’s program in the Utrecht Early Music Festival 2015, I’ve researched this link in the case of that icon of Elizabethan music, John Dowland. A famous lutenist, his fantasies and pavanes have led many a twentieth-century guitarist to the lute. I’m one of those guitarists, and so I can claim that I keep company with the likes of Jan Akkerman and Sting.

Granted, the title of this CD, Dowland in Holland, also stems from wordplay with the man’s name. He himself used the phrase ‘Semper Dowland, semper dolens’ – ‘Always Dowland, always doleful’, thereby accentuating his trademark, a musical melancholy that still grabs us by the throat four centuries later. John Dowland (1562/3 - 1626) was not only a famous composer of lute music but also of ayres – songs with lute accompaniment. The First Booke of Songs and Ayres (London 1597) was his most popular publication; Flow my teares from his Second Booke (1600) was his most popular song. That song was originally a pavan for the lute, named Lachrimae (‘Tears’), which in its second guise as a sung ayre was furnished with this tearful text:

This unfathomable grief plucked sensitive heartstrings in the Dutch Republic too. So for example the Dutch minister Dirck Rafaelszoon Camphuysen (1586-1627) ‘covered’ Dowland’s Flow my teares with his own text, ‘Traen, oogen, traen’ (‘Weep, eyes, weep’) [track 10], which amounts to the same thing, except that the cause of Camphuysen’s grief was no reluctant maiden (assuming that’s what Dowland’s problem was). Camphuysen never mourns amorous trifles but rather foolish human nature, inclined to sin. After Camphuysen’s Traen, oogen, traen was published in 1624, other poets followed him, writing songs with similar openings: Jan Harmensz. Krul followed with the love-lament Klaegh, oogen klaegh (‘Mourn, eyes, mourn’) in his Minnelycke Sangh-Rympies (1634); an anonymous poet in Arions Vingertuig (1645) with Huil, borste, huil (‘Howl, breast, howl’), also a love-lament; Anthony Janssen in Christelijck Vermaeck (1645) with Schrey, ziele, schrey (‘Cry, soul, cry’), a lament about the sinful soul, just as Camphuysen had done. Adriaen Valerius wrote a lament about the death of the French king Henry IV in his Myn ziele treur! (‘My soul, mourn’, 1626).

When Camphuysen set Traen, oogen, traen to Dowland’s Flow my teares, Dowland’s music had already been circulating in the Republic for some time, in the form of lute solos. We find those in the printed tablature book Florida (1601) from the Leiden lutenist Joachim van den Hove and in the Thysius Lute Book, a manuscript begun in 1595 by the Leiden University student and later minister Adriaen Jorisz. Smout. Camphuysen was, however, the first Dutch writer to provide Dowland’s Flow my teares with a new text. He was also first with other melodies of Dowland’s: for Can she excuse my wrongs (The Earl of Essex Galliard) he wrote a song about the Last Judgment [12], for Piper’s Pavan he wrote the song Van volmaeckte Regering (‘About Perfect Government’) [14], for Now o now I needs must part (The Frog Galliard) he wrote the long song Christelijck Gevecht (‘Christian Struggle’) [13]. For that last song, Camphuysen provided an alternative melody, probably of his own composition. For the sake of completeness Lady Laiton’s Almaine must also be mentioned, to which Camphuysen set his Raedt tegen Toorn (‘Advice against Anger’) [not included on this CD]. Camphuysen published all this in his collection Stichtelycke Rymen (‘Edifying Rhymes’) (1624), which, judging by the dozens of reprintings, found a warm welcome among the Protestant part of the population, warmer than that given to the poet himself, who thanks to his Remonstrant beliefs was continually persecuted. Camphuysen was remarkably careful with the text underlay to his musical notation; the original melodies he notated somewhat after his own fashion.

We find Dowland’s Come again not in Camphuysen but in the Nederlandtsche Gedenck-clanck (‘Dutch Commemoration Sound’) (1626) of Adriaen Valerius, who wrote a lament over the execution of a Flemish Reformed martyress to this tune. Finally, an exceptional melody is that of the second of the seven Lachrimae, or Seaven Teares (1605): Dowland’s cycle of polyphonic settings of his Lachrimae melody for a consort of five violas da gamba. The Utrecht minister Jodocus van Lodenstein was, decades later, the only Dutchman to write a song text on this, as Treur-gesang over d’elende der Pied-montoysen ‘Reysig geselschap!’ [16] (‘Sorrowful song about the miseries of the Piedmontoise’, ‘Travelling companions!’).

Apparently another Dowland fan was the Utrecht carillonneur and recorder-player Jacob van Eyck. Of the seven Dowland melodies that worked their way into Dutch song culture, he published variations on four of them in his Der Fluyten Lust-hof (‘The Recorder’s Pleasure-Garden’) (1649): Pavaen Lachrymae [15], Comagain (Dowland’s Come again: sweet love doth now invite), Excusemoy (Dowland’s Can she excuse my wrongs) and 2. Courant, of Harte diefje waerom zoo stil (‘2nd courante, or, Dear little thief, why so quiet?’), which uses the tune of Dowland’s Now o now my needs must part, also known as The Frog Galliard.

The seven songs brought together here under the rubric Dowland in Holland represent the broader phenomenon of the English influence on Dutch popular music in the Golden Age. This is summed up best in the case of Jan Janszoon Starter (1593- 1626), the poet of the successful secular songbook, Friesche Lusthof (‘Frisian Pleasure-Garden’) (1621). Starter was born to English parents, grew up in Amsterdam, established himself as a bookseller in Friesland and introduced many English melodies into the Dutch Republic. One example is the tragic ballad Twas a youthful knight, to which Starter penned a lament for a young Frisian woman who had died: Blydschap van mijn vliet (‘Joy flees from me’) [3]. The many dozens of tune-indications that later named this song testify to Starter’s good ear for a hit song. Starter used Sir Edward Nouwels Delight for his lovely song Silvester inde morghen-stond, begaf hem op de jacht (‘Silvester set out hunting in the morning’) [5], and the pastoral love-lament Com Sheapherdes deck your heds for the sad song Lieflocksters van de min (‘Dear lures of love’) [6]. These findings come from the Nederlandse Liederenbank (Dutch Song Database) of the Meertens Institute, in which this sort of information can be found with a couple of simple search parameters. In the case of some songs, of which Com Sheapherdes deck your heds is one, the melody has not been preserved in a single English source, but only in Dutch songbooks such as Starter’s. With other songs, even the English text has not been preserved. Starter’s song Kheb veel nachten lang gewaecket [7] is probably a translation of the song Y Have waked the Winters Nights that he names as a tune-indication, but the rest of the English text is lost.

Most of Starter’s melodies are in fact anonymous. Only for My Mistris sings no other song is a composer known: Robert Jones, who published the song in four parts and with lute accompaniment in his First Booke of Songes or Ayres (1600). Starter set it to Ick weet niet wat myn Vryster schort (‘I don’t know what’s bothering my mistress’) [22], as saucy a song as the English original. That was probably also the case with Is Bommelalire soo groote geneughd (‘Bommelalire is so fun for all’) [23], for which no English text has survived. Starter included these last two songs in a supplement to his Friesche Lusthof named Boertigheden (‘Jocularities’), and which are really just about only one thing: sex. This matches the tone of the sung farces or jigs with which English groups of comedians and musicians entertained the continent in the early decades of the seventeenth century. They crossed the North Sea to the Netherlands, the north of Germany, and Scandinavia. And we see something of that on this CD not only in Starter’s Boertigheden, but also in several of the German tune-indications that point to English ditties from the comic repertoire. These evidently hung on in Germany and from there ended up in Dutch songbooks: O myn Engeleyn, ô myn Teubeleyn (‘O my little angel, o my little dove’) [2], known in England as The Hunt’s up in the Friesche Lusthof, and in the Stichtelycke Rymen the tune-indication given as ‘Mein hert is betrubt biss in dem thodt’ (‘My heart is troubled unto death’) with which Camphuysen closes his Christelijck Gevecht (‘Christian Struggle’) [13-III]. Starter called that last melody the Engelsche fa la la.

It was not only comedians who came over from England to the continent. A fair number of musicians of English origin settled in the Republic, earning their bread giving lessons and performing at weddings and parties. Even as serious a musician as Dowland lived for some time at German princely courts and the Danish court of Christian IV, after failing to secure a position in Elizabeth’s court. Perhaps in his case there were political calculations involved, for Dowland, a Catholic, had mingled with anti-Elizabethan circles in Italy. Other Catholic musicians, such as the harpsichordists John Bull and Peter Philips, set out for the Southern Netherlands. For Philips’ problems with the English secret service, see track [18].

What is surprising is that almost nothing of Dowland can be found in Starter. Dowland’s melancholy song melodies seem to have made more of an impression in the Republic on Calvinist poet-preachers such as Camphuysen than on less serious, worldly poets like Starter. These two men were indeed polar opposites. They must have known about each other, possibly even known each other personally, since they lived in the Frisian city of Harlingen at the same time. But they would not have valued each other’s work. Starter wrote nice, singable, musical texts, in which he closely follows the contours of the melody, often with copious use of rhyme, as befits the rhetorician that he was. Camphuysen on the other hand wanted to deliver poems that could be sung as easily as read, which is to say, read out loud. In his vision that meant a very regular alternation between accented and unaccented syllables, which did not always go very smoothly with the melody. In addition of course the content of the two men’s songs came from diametrically opposed points of view. A vicious satire-song about Starter even appeared under Camphuysen’s name, in which Starter from his grave repents of the ribaldry with which he has corrupted the Dutch youth [24]. The song appeared in 1647, twenty years after Camphuysen’s death. Some time later the actual poet revealed himself to be Christophorus van Langerack, also a Remonstrant pastor. But the damage was done: for the Protestant Netherlands, Starter would be considered a secondrate poet clear into the twentieth century, one who misused his modest talents for bad ends.

So far the English music discussed is that which ended up in Dutch popular culture: popular ballads and elegant ayres that became liedekens (songs of all sorts) for the song-hungry Dutch citizens. But a remarkable case of elite English music that reached the Dutch populace is a set of gamba consort pieces from the English court which were published in 1648 by the Amsterdammer Paulus Matthysz under the title Konincklycke Fantasien (‘Royal Fantasies’). The amazing route these fantasies took from London to Amsterdam is described below in tracks [19] and [20]. They complete the brief glimpse that this CD gives of the strong influence that the rich music of England had on Dutch musical life at the dawn of the Golden Age.