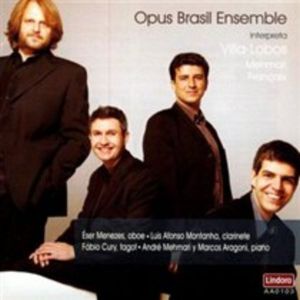 Lindoro
8436003801030 | AA 0103 | 1CD
The trip by Heitor Villa-Lobos in Paris in the decade of the 20s is seen as crucial in its production. The French capital was the centre of musical trends at that time, and Vill-Lobos would go on to be influenced by Stravinsky and Jean Françaix.

Celebrated for its refinement, elegance and humor present in scores as the Piano Concerto (1936), and Bright Trio for Strings (1933), Francaix's Divertissement for Oboe, Clarinet and Bassoon was composed in 1947 for the Trio André Dupont. The third composer presented on this CD, André Mehmari, is characterized by the ease with which similar moves in the fields of popular and concert music. An example of this popular game with the universe is the Short Choro choro works like a typical, as ABACA, with a fantasy of introduction in which the bassoon plays 7-string guitar in the traditional set.