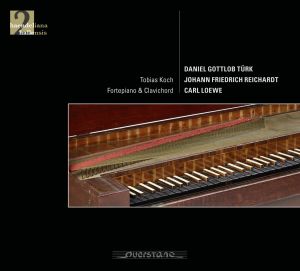 Querstand
4025796014204 | VKJK 1420 | 1CD
The central intention of the edition Haendeliana Hallensis is to preserve and present the richness and variety of the music culture and tradition at and around the Handel place of Halle.
Volume 2 of this edition demonstrates the capacity of treasures selected from the collection of historical keyboard instruments at the Handel House. The double CD brings in relation the keyboard work of three composers affiliated
to Halle, who spent around 1800 an important period of their lifes in the city and thus each distinctly formed regional music culture.
Daniel Gottlob Türk and Johann Friedrich Reichardt resided till the end of their days. Within Türk's oeuvre keyboard music fills an important place; while keyboard compositions by his contemporary Reichardt or his student Carl Loewe mark a kind of curiosities. During their life times and long after their aesthetic value have been underestimated. Only through a gradual understanding that these works should not be compared with those of Beethoven, but instead re- garded as specimens of an independent genre which arose during the same period in Central and Northern Germany, can they be appreciated and enjoyed for their beauty, melodic invention, rhythmic sophistication and certain interest- ing harmonic developments. This CD intends to propose new impulses to this discovery.