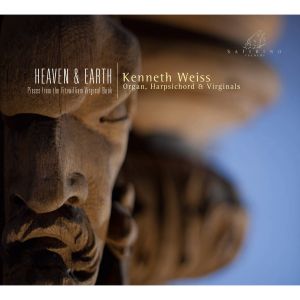 This is Kenneth Weiss’s second recording of extracts from the Fitzwilliam Virginal book and was recorded in the church of Nielleslès-
Ardres near Calais on the church organ dating from 1696, as well as a copy of a ‘mother and child’ Flemish virginals by Andreas and Jacob Kilstrom, and a copy of an English harpsichord from 1579 made by Malcolm Rose. As with Kenneth Weiss’s first Fitzwilliam
Virginal book recording (‘A Cleare Day’, SR111), the album includes a booklet with a liner note in English and French by the
distinguished British musicologist, Richard Langham Smith, as well as articles on the three instruments. The images are by Arthur Forjonel taken on the day of the recording and the sound balance, as in all our recent recording, is the inimitable work of Jiri Heger.
The recording was made on the day before a concert in the Contrepoints 62 organ organised by the Conseil Général of the Pas-de-Calais, and some pieces on the album were recorded in the concert. Kenneth Weiss has been fascinated by the Fitzwilliam Virginal Book since he first started playing the harpsichord and we hope this second recording will be followed by others from the Book. The 1696 organ with its extraordinary sonority, the very distinctive colours of the 8’ and 4’ virginals and the unique sound of the the 1579 Theewes harpsichord, the only signed and dated 16th-century harpsichord from northern Europe which has come down to us, are ideal for this repertoire and a pure pleasure to listen to.