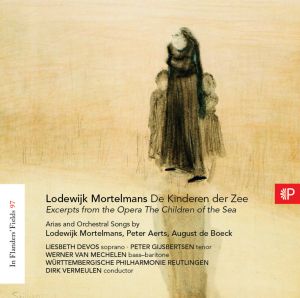 In Flanders' Fields Vol. 97 - The Children of the Sea

Phaedra
5412327920971 | PH 92097 | 1CD
This CD is centered around fragments of the “lyrical drama” (i.e., opera) The Children of the Sea by Lodewijk Mortelmans (libretto by Raf Verhulst (1866–1941) and the grand orchestral song Ellen, long lost but recently rediscovered. In 2018 we’ll celebrate the 150th anniversary of Mortelmans’s birth, so that the year will be a Mortelmans Year. It is amazing how many interesting and indeed beautiful works of this major composer have never been explored.

Mortelmans worked on this opera between 1900 and 1915. It was premiered at the Antwerp Flemish Opera on March 27, 1920. Afterwards the composer worked material from this opera into a 90-minute suite for soloists, choir and orchestra; for concert performances Mortelmans also wrote a purely orchestra finale. But the opera has never been performed since, and the suite only fragmentarily, in 1942, in a concert conducted by Flor Alpaerts. The essence of The Children of the Sea is featured on this CD. Because Mortelmans’s orchestral finale contains just about all the important themes of the entire work, we decided to present it as a kind of overture on this CD. In addition, this CD contains a first recording of a true concert aria for tenor and orchestra by Mortelmans, Ellen: A Song of Woe (1895).

I am convinced that a live performance of this and indeed all other works on this CD would be most rewarding and would be received with applause by audiences that have for some generations been deprived of getting to know the masterpieces on this CD. A name as well-known as Mortelmans is that of his contemporary and colleague August de Boeck. Sadly neither is a prophet in his own country. Peter Aerts is even less so. In our series In Flanders’ Fields we want to shine the spotlight on him, by recording his eponymous song for tenor and orchestra In Flanders’ Fields.