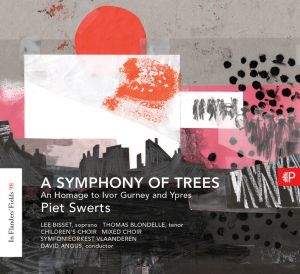 In Flanders' Fields Vol. 98 - A Symphony of Trees

A Symphony of Trees has evolved into an emotional and musical reflection on Passchendaele 1917. The starting point of this composition was provided by the inner monologues that Ivor Gurney, an English soldier, composer and poet, wrote in his numerous war poems. At the front he personally experienced human misery in all its forms. His texts deal with the entire emotional spectrum of such extreme events and circumstances. They raise the theme of this commemorative concert to a universal level. On the one hand A Symphony of Trees is tied in with the 1917 events at Ypres and Passchendaele; on the other it refers to current events in our insecure world full of conflicts and theaters of war. The work is an nineteen-part oratorio, whose main thread is Gurney’s highly individual poetry. Female pendants we found in moving poems by Charlotte Mew and Margaret Postgate Cole.

The overall structure of this long work is determined by the space in which it was to be performed on the one hand and by the central poem of the libretto, Memory, let all slip, on the other.

The space of Ypres’ majestic Saint Martin’s Cathedral offers opportunities to explore space in the projection of sound. Eventually we settled on an unconventional U-shaped set-up, with the orchestra in the back of the longest nave, and all choirs to the left and right of the audience, all the way up to where the orchestra was. The children’s choir was sometimes placed high in the gallery, sometimes down below. There is a niche high above where the orchestra was seated, from where a trumpet player quoted the Last Post against a somber orchestral background. Hints of nature, including horns sounding from afar, necessitated separate positioning of horns and timpani. All the instruments and voices in all these various positions were used together in the finale to maximum effect; an extra organ was positioned in the orchestra, such that two organs could sound together in the finale. Synchronizing all forces proved quite feasible and resulted in a wondrous feeling of spatial exploration during the actual performance.

Memory, let all slip, the central poem, is used four times. At first choir and orchestra present it subdued. Then it sounds as if it came from heaven, sung by the children’s choir up in the gallery. Towards the end it is performed a capella by the choir, whilst the solo soprano rises above it in a mournful lament. It all ends with both soloists, the choir and the organ played on the pedalboard joining in a hugely emotional, hopeful and grandiose apotheosis, which ultimately brings us nearer to God (God is nigh). Four orchestral interludes connect the five movements with poems sung by the tenor and the soprano. Recapitulating the opening movement as the second interlude, in a purely orchestral version, offers the listener an opportunity for recognition. A major-minor theme as a musical symbol and translation of the 138 trees of remembrance around Ypres serves throughout as a leitmotiv. In all the moving texts set to music, the tree serves as a metaphor for all kinds of human experiences, such as suffering, hope, grief, pain, death and resignation. The work’s solid structure, the location of the concert—with its unique sacred and acoustic characteristics—as well as the rich content of its poems will all contribute to making this work an overwhelming and moving experience, as well as a redeeming and deeply human one.