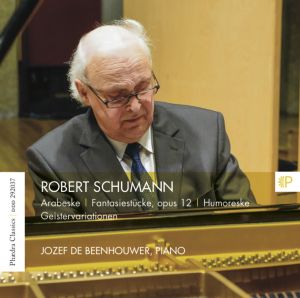 Between October 1838 and April 1839 Robert Schumann was staying in Vienna, in search of a new publisher of his Neue Zeitschrift für Musik. That would enable him to start a new life there, together with his fiancée Clara Wieck. But he soon had to conclude that the Austrian censorship in conservative Vienna left no room for his progressive ideas as a composer and publicist. In a letter dated December 30, 1838, he complained to Clara: “You won’t believe the stupidity and brutality that prevails in music here.” In spite of this reversal Schumann kept composing at a staggering rate. He wrote a number of important piano works in the briefest of time, including Arabeske, Op. 18; Blumenstück, Op. 19; Humoreske, Op. 20; Nachtstücke, Op. 23; and the first four movements of Faschingsschwank, Op. 26. All these works were published in Vienna by Pietro Mechetti.