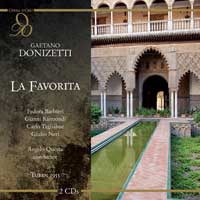 The great conductor Arturo Toscanini once said, “the opera La Favorita is all beautiful; the last act — every note a masterpiece.”
Perhaps even more impressive, however, was the verdict of Richard Wagner, who dismissed most Italian operas; nevertheless he asserted that in Favorita, “there is greater skill, and a dignity you would seek in vain in the other countless works of the inexhaustible maestro” — referring to Donizetti’s amazing fecundity, often resulting in two or three new operas per year. In La Favorita, a young monk leaves his order to pursue the beautiful Leonora, unaware that she is the secret “favorite” (mistress) of King Alfonso XI of Spain. When he finds out he angrily rejects her, but at the end they are reconciled, and she dies in his arms.

“A big advantage is ... the presence of Giulio Neri. He was one of the few Italian basses to have a big black sound in the Boris Christoff mould ... His fury at the end of Act II, abetted by Questa, is awe-inspiring ... Another strong point is Carlo Tagliabue as Alfonso. He was nearing the end of his career (he retired in 1957) but signs of age in the voice, which still retains a firm, golden quality, are used artistically to create a king who has regal dignity but also humanity ... [The recording also has] the best Ines ... [a tenor] with several points in his favour ... [and] a magnificent Leonora. Any dedicated opera fan is going to want to hear it.” — Musicweb-International.com