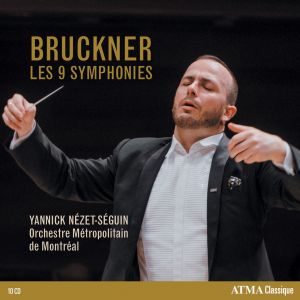 Atma Classique
0722056245128 | ACD 22451 | 10CD
With the release of a sumptuous boxed set of 10 discs, the Orchestre Métropolitain de Montréal directed by Yannick Nézet-Séguin completes a 10 year project to record the complete symphonies of Anton Bruckner. The First and Fifth Symphonies were recorded in 2017, and are being released for the first time as part of this set. These two symphonies will also be available individually, in digital format only.

Recordings of Bruckner’s symphonies by the OM/YNS team have won unanimous praise from critics worldwide, and have established Yannick Nézet-Séguin as a brilliant conductor of the composer’s works. “This is a very beautiful Bruckner Fourth Symphony, by an increasingly interesting Bruckner conductor. It's refreshing to hear Bruckner's orchestral writing brought to life on so many levels, captured faithfully by the recording.”
— BBC Music Magazine