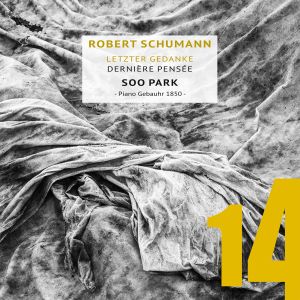 Herisson
3770002538098 | LH 14 | 1CD
Robert Schumann is one of a number of 19th century artists whose creativity was dogged by mental illness. Others included Hölderlin, Nerval, Maupassant, Nietzsche, Wolf... In the case of Schumann, the works he wrote at the end of his life have particularly suffered from being seen solely through this prism, which has only served to cloud perceptions of them. Madness in no way helps us understand Schumann’s late style. On the contrary, it creates a barrier to understanding by focusing our attention on biographical considerations to the detriment of the works themselves. The problem is that it was not Schuman the composer who was mad, but Schumann the man.
For Schumann, 1845 was the year of Fugenpassion. He became passionately interested in counterpoint, resulting in a new language: Schumann’s late style. The late style of great composers has always provoked ambivalent reactions, between fascination and incomprehension. In the case of Schumann, his late style has only been re-evaluated very recently. What are its characteristics? The implacable logic of counterpoint, disdain for convention, the perfume of eternity and retreat from the world... The style had no real immediate heirs. Rather than Brahms, it is in Bill Evans that certain of his harmonies can be detected...
“The music has stopped now – at least from outside… I must stop now, it’s beginning to get dark.” The victim of increasingly frequent auditory hallucinations, during the night of 10th February 1854, Schumann heard angels (according to certain reports, the spirit of Schubert) dictating a melody to him. He used the rare moments of respite between his incessant crises to compose a series of variations on this theme. On 27th February, after tidying up the score, he escaped Clara’s vigilance and threw himself into the Rhine. Some sailors fished him out again and took him home. He was taken to Dr Richarz’s clinic in Endenich, from which he was never to return. He dedicated his variations to Clara. The variations, known variously as Geisterthema (Theme of the Spirits) or Letzter Gedanke (Last Thought) were so associated with madness that Clara refused their publication and it was not until 1939 that they were finally published. Schumann’s work was finished, he was simply Robert Schumann, fighting against madness. Friends came to see him, and bore witness to the highs and lows of his illness. He took up his correspondence with Clara again and asked for news of his children. He was waiting for death. “I saw him; it was evening, between 6 and 7 p.m. He smiled at me and kissed me with infinite tenderness... I will never forget that! I would not exchange that embrace for all the treasures in the world!” (Clara Schumann, Tagebuch, July 1856)