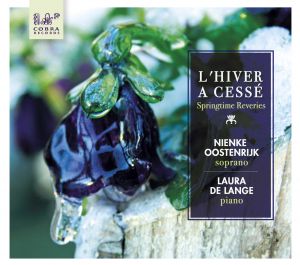 Cobra
8713897903850 | COBRA 0047 | 1CD
This selection of vernal songs depicts spring in various musical ways. A common thread in most if not all songs is that on a first level Spring is seen as the force of nature that chases away Winter and thereafter keeps the cold at a distance. On a second level the songs vary wildely.

In the focol point of the program, the allegorical song “Viola” by F. Schubert (1) spring itself and the flowers are personified. Spring is the lover and bridegroom-to-be of Viola, the well-known violet. Spring also appears as sovereign  leader of the flowers  at the dramatic moment when Viola, sweetheart and favourite of Spring, goes missing.  Spring disperses as it were an AMBER Alert among the flowers, urging them to search for Viola.  Spring is seen as the force of nature that chases away Winter and keeps him at a distance. Schubert’s Viola,the focal point of the program,prepares herself for the oncoming reunion with her bridegroom,Spring. On her way to her lover, Viola is attacked by an unexpected, icy cold, which is also portrayed in the piano part. She suddenly realizes that she has been imprudent and naïve. Dear-oh-dear! An early death for Viola is unavoidable, as she cannot endure extreme cold. In the final verse, the snowdrops,who had awoken Viola, are transformed to funeralbells (as heard in the piano at the close of the song). In this striking and effusely worded song, aspects of Schubert’s life story are revealed. “Viola” is a metaphor for his own vulnerable soul and health, wich could not withstand the forces of disease. She succumbes to her intense longing for love and warmth, pining away in shame and loneliness. Schubert expresses this state of mind in music and moves the listener profoundly. The misery can almost be felt physically. It should be added that Schubert wrote the text in coöperation with Franz von Schober,with whom he shared  his life during the time they both fell ill with the same disease.  Von Schober wrote his poems exclusively for Schubert. They used to call their combined efforts “ Schobert “.

Instead of laments, dreams about the sun during its winter absence are expressed in H. Heine’s poem “ Ein Fichtenbaum steht einsam”(The lonely Firtree)  (2), and its Norwegian counterpart “Pa Norges nögne Fjelde”(3). And dreams are followed by some odes to vernal happiness such as“ Med en Primula Veris “(the first Primrose)(4) and“Das erste Veilchen”(the first Violet)(5). The Violet and the primrose are the first flowers to proclaim the rite of spring, and with it love,hope and joy.

The sun is addressed reproachfully in E. Mörike’s poem” Zitronenfalter”  (Brimstone Butterfly) (6).The sun can be a deceitful,unpredictable force of nature. In the music we catch the trivial grief poured forth by a hungry and thirsty little butterfly. This  lamenting about the fatal powers of  spring is again followed by an ode of effusive joy. In P. Verlaine’s poem “L’hiver a cessé ” ( winter is ended ) (7), the title-song of this CD, the inspiration of spring is spread from one soul to another. The poet experiences spring in his soul, and the saddest heart must surrender to the immense joy spreading through the air.
The theme of fate, so obvious in “Viola”, can be perceived much less explicitly in Schubert’s song on a text by E.Schulze “Im Frühling” (In Spring) (8). The central theme here is unattainable love and happiness. Spring has become a purely nostalgic feeling regarding the past, caused by the musical experience of youthful love. On the one hand spring causes the loss to be acutely felt, while on the other it keeps the love-experience alive in an idyllic valley. For this song Schubert chose a special form, that of theme and variations. This form is perfect to express the concept of 'the same, yet not the same". The theme of this song is the last and most refined metamorphosis of a tune that had run like a thread through his life.

Grieg’s “Foraarsregn” (Sping Showers) (9) evokes a euphoric sense of youthful happiness. Here the rains  remind the poet H.Drachmann of his youth. In the raindrops  he hears pearl-like music made by fairies hiding under dripping leaves. They play their little harps scattering sparkling rain like orchestral waterfalls in a sea of budding green. We hear a  many arpeggio’s bubbling up from the piano, imitating their harps, evoking a mysterious,  springtime atmosphere.

Spring even fuctions as a powerful opiate in the song “Frühlingsnacht” (Springnight) (10) by S. de Lange. The poet, Duchess W. von Württemberg, evokes through the text sensual vernal forces. Two lovers become intoxicated by the forces of spring; the smells of flowers and the singing of nightingales.  Singer and pianist and singer combine to simulate the drunken lovers. The idea of drunkenness can be heard and felt by the listener.

In Mendelssohn’s “Frühlingslied (11), the poet Nikolaus Lenau describes spring as a divine force felt on earth. The very soul feels the breath of spring. In the text Winter steals the freedom from the soul, making it feel imprisoned. Spring, however, sets it free again and brings life, love and hope.

The last two songs are by Hugo Wolf set to poems by E. Mörike:  “Er ist’s  (it’s him) (13) and “Im Frühling” (12). Both poems are also to be found in Mörike’s great Bildungs-novel “Maler Nolten”, in which Mörike outlines and interprets his own psychological development. Nolten  hears the song “Er ist’s” through the  bars of his prison. His craving for spring is felt by all his senses.  Not only does he hear the song through the bars of his prison. He sees the blue sky through a small opening.The smells of spring stimulate his renewed zest for life,as is symbolized by the harp-arpeggio’s in the piano-part. Enlightened by these sensations the poet addresses spring as a long-expected person: ” Spring, it’s you! You are the one that touched me! “
The song “Im Frühling” evokes pure transcendental enlightment . In this poem the light of spring becomes united with the light in the poet’s soul as though it were a touching of the “crown-chakra”. The power of spring is capable of leading one to a state of mind in which all differences are transcended and we no longer  exist as separate entities. This happens in E.Mörike’s poetry,a process which H. Wolff masterfully sets to music. There is perfect unity of voice and accompaniment; of melody, harmony and rhythm.  The thoughts of the central character are directed alternately inwards and outwards. His soul,hart,and all his senses make joint effort to associate his fleeting memories and thoughts with natural phenomena: the sky, the humming bee, the clouds, the wind, the warmth of the sun. The present is melted together with the past in body and environment. The most beautiful moment of the program appears when singer and pianist realize this unification.

With “La Fée aux Chansons “( the Song-fairy ) (14) completes this cycle of spring-songs. The fairy is the singing-teacher of the birds, a task she tackles very seriously and strictly:  birds that sing out of tune are thrashed with a little twig. But she is very sad when all the naughty little birds flee to  warm,far-off,regions.  In Winter, she pines awayand her grassy head-dress withers. But by dreaming up new songs, the joy of spring is approaching so that the cycle can start all over again. “A new Spring and a new Sound”      (openingsline from the Dutch poet  Gorter’s “May”).