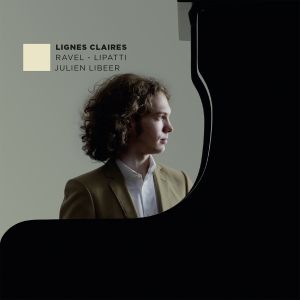 Epr classics
0608917720624 | EPRC 020 | 1CD
One of many novelties which has recently emerged in the realm of music is the inclination to give names to recordings, a practice which I have found hazardous for some time.

I am well aware that our era has a knack for storytelling, but when one has spent many years on exploring certain pieces, when one has tackled them from all conceivable angles while relishing their magic, and when – like me – one wishes to round them up in function of some aesthetic intuition rather than a predefined concept, I can assure you that invoking an encompassing story or label in a handful of words is well beyond one’s talents.

You may object now that I take things too seriously, and you would be totally right, for during the preparations for this first disc, one title immediately and irresistibly imposed itself: “Lignes Claires – Luminous Lines”.

At the time when the Evil Penguin people offered me a recording contract, Le Tombeau de Couperin by Maurice Ravel was the spearhead of my solo recitals. I’d played it on some of the most beautiful (and intimidating) stages I’d been invited to (such as the Palau de la Musica in Barcelona, or the Amsterdam Concertgebouw), and the idea of recording it seemed a fitting finale to a long journey. A fine occasion also to revisit the Valses Nobles et Sentimentales: I’d worked on them extensively some years before and I had been considering for some time to put them back on the menu.

Once the decision to record these works was final, a question notoriously familiar to musicians raised its head: “What would go well with them?”

During what I like to refer to as my musical adolescence, I fell in love with the recordings of Dinu Lipatti. That is an understatement: I was in fact totally obsessed. I started to collect everything that somehow pertained to this extraordinary man, I wrote to extant acquaintances, and travelled through the depths of Switzerland to meet one of his pupils. Eventually, I happened on his output as a composer, which had been eclipsed to some extent by the prevalent awe for his performing genius, but which I immediately put on my program in my pristine enthusiasm. Ever since, I can’t help thinking that Lipatti and Ravel have certain features in common, apart from the fact that they were both of petite build.

Far from me to suggest that Lipatti was Ravel’s equal as a composer. While masters like Paul Dukas and Georges Enescu have voiced sincere admiration for Lipatti’s compositions, Donald Sturrock is undoubtedly right when he says, in the liner notes to this recording, that Lipatti died too young to write his true masterpiece. In this sense, Grillparzer’s epitaph for Schubert – “music has buried a rich treasure here, but even more beautiful expectations” – is more justifiably fiting for Lipatti. Still. Ravel and Lipatti share a mind of extraordinary clarity, a supreme sense of melody, a mastery of polyphony that allows for wonderfully bold harmonies, and a miraculous (or, rather, assiduously wrought) precision in the musical discourse. In their own fashion and register, they appear to me as luminous beings, which is why I feel they complement one another. This, in turn, is why the title “Lignes Claires” came so naturally.

Both Ravel and Lipatti were extremely critical for themselves. Ravel compulsively polished his output, and was capable of destroying anything he was not perfectly satisfied with. Lipatti, similarly, could rework a piece for four years before he allowed himself to put it on his concert program. If we, performers, can exercise no moral or aesthetic rights on the heritage of the radiant spirits whose work we manage, we have at least the freedom to be inspired by their attitude. In this sense also, Ravel and Lipatti hold out luminous lines.