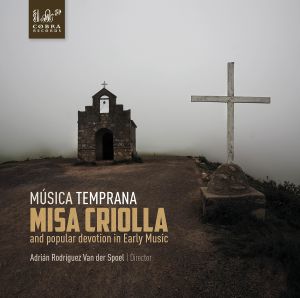 This new recording of the ever so popular Misa Criolla was made to mark the fiftieth anniversary of its creation in 1964. It's a sparkling, genuinely Latino version, reminiscent of the orginial recordings. In this vibrant new edition Ramirez' popular mass is embedded in the 17th and 18th century vespers, villancicos and hymns, all examples of 'spontaneous' expressions of popular relegion and folk culture.
Ramirez' composition indeed draws upon an ancient tradition of popular devotion and is deeply rooted in Latin America's folk music.

Surprisingly, no new recorded versions of any importance have seen the light since the early 90ties of the previous century. With a classical schooling, fed by roots in the musical tradition of Latin America, the musicians of Musica Temprana are very well placed to fill this gap.