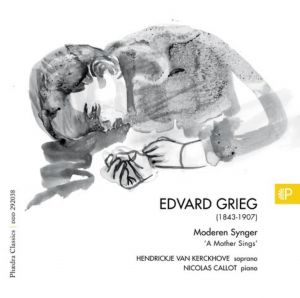 They had one child together. But their budding happiness was short-lived, literally alas. In Edvard Grieg’s life, fate struck hard blows more than once. For shortly after Alexandra died, barely one year old, Grieg’s wife Nina Hagerup miscarried. “It is hard to watch the hope of one’s life lowered into the earth, and it took time and quiet to recover from the pain,” Grieg wrote shortly after the funeral. “But thank God, if one has something to live for one does not easily fall apart; and art surely has – more than many other things – this soothing power that allays all sorrow!” As this CD will show, the composer, the lied was one of the ways of the composer, and indeed the most important one, that helped him cope with the dramatic events in his life, both ups and downs.