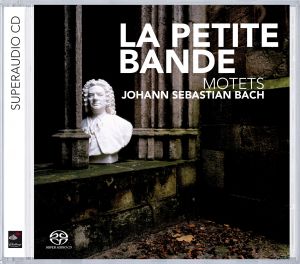 Basso continuo :
Tom Devaere, violone
Frank Agsteribbe, organ J.S. Bach's motets are the indisputable summit of his output. Traditionally the motets have been placed at the centre of his choral universe.Choirs can show off their technical brilliance, and moreover these scores are a joy to perform regardless of one's style of interpretation. However, for the last 25 years musicians and musicologists have subjected the importance of Bach's choirs to a fundamental review. The current research points out that Bach himself almost never had more than eight singers at his disposal (even for double-choir pieces). This is far away from the usual more or less large choirs for the great choral works. This research has been the source of inspiration for this production of the Bach motets to use only one singer per part. The result delivers an unusual transparency and clarity of the musical lines. (The 4-part Motet Lobet den Herren, alle Heiden has not been included in this recording because of serious doubts about authorship.) Belgian violinist, violist, and conductor Sigiswald Kuijken (born 1944, near Brussels) studied music at the Bruges and Brussels Conservatories, where he received a premier prix for the violin in 1964. He was seven when he first came into contact with the Renaissance instruments. Like his brother Wieland, he is self-taught on the viola da gamba.. In 1969 he began to re-establish the old technique of violin playing, without using a chin or a shoulder rest and without holding the instrument with the chin at all. This technique has been adopted by many other players since then and was taught by Sigiswald Kuijken at The Hague Conservatory between 1971 and 1996. He has undertaken regular tours of Europe, the USA, Australia and Japan. He has also given countless solo recitals and has recorded most of Bach's chamber works and pieces for solo violin as well as music by Corelli, Vivaldi and Muffat. In 1972 he formed the Baroque Ensemble La Petite Bande with whom he has recorded music by Lully, Rameau, Bach, Händel, Gluck, Haydn, Mozart and many others. He also appears as guest conductor with many other Baroque and modern ensembles and made countless recordings.