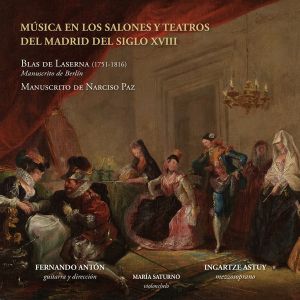 Lindoro
8436003830344 | NL 3034 | 1CD
One of the most successful theatrical genres during the second half of the 18th century was, without doubt, the staged Tonadilla. By showing life in a cheerful, humourous and often shameless way, it attracted to the main theatres of Madrid, the Principe and the Cruz, a society wishing to be entertained with fresh and daring presentations of daily matters. An important component of the Tonadillas are seguidillas – songs based on popular dances – which were joined near the end of that century by the tirana, another musical form that had arisen from Spanish folklore. Both seguidillas and tiranas constitute links between the different social spaces that define the tonal identity of Spanish music at the end of the Enlightenment.
From the Theatre to the Home

Beyond their popularity in the theatre, seguidillas and tiranas as a traditional form of entertainment were also performed in a more personal, private social space: the home. Thus were spread the jokes, the humour, the grace and the panache that emanated from these pieces – characteristics which reflected those associated with being “a good Spaniard”. A“good Spaniard” would appreciate the sharp and ingenious wit contained in these verses – as opposed to others who, turning their backs on the traditions of their elders, embraced foreign poetry and music. So it is hardly surprising that music teachers placed advertisements in the Madrid press, offering lessons in singing seguidillas and tiranas – while accompanying yourself with the guitar – so that youngsters of a certain class might augment their charms by emulating the artistry of the performers of the stage. Seguidillas and tiranas thus became infused with more domestic sounds and, as inheritors of tradition, propagated a vision of Spain that spread eloquently among the streets, squares, halls and theatres of the city in the form of songs.

In their most danceable origin, seguidillas and tiranas were accompanied on the guitar – the instrument that had long enjoyed widespread popularity in Spain. Being manageable and accessible, and with practical and easily learnt techniques for performing harmonies, the guitar had become the faithful and inseparable companion of the popular dance. In its ascent to the theatre, it was not limited to being yet another element in the instrumental repertoire of the tonadilla musicians, but rather shared the stage as a star in its own right: it was not just part of the decoration – as the musical instrument representing Spanish popular culture – but rather brought to the stage a sonority imbued with the everyday sounds of Spanish society.
In private homes, the popular seguidillas and tiranas could no longer rely on the wider range of instruments used in the theatres. The most apt and most easily adapted instrument to accompany this genre was none other than the familiar guitar. Musicians and composers understood this and adapted their songs in order to be played with just the guitar, or occasionally guitar and bass. These tunes entered bourgeois salons in the form of songbooks that were on sale in book stores, warehouses and other establishments. In the absence of a printing press specialised in sheet music, the scores that circulated in urban areas in the late 18th and early 19th centuries were written out by hand, either by dedicated copyists or by the composers themselves. Blas de Laserna (1751-1816), an acclaimed creator of tonadillas, established a store at the turn of the century where he copied music and wrote arrangements, selling both his own works and the best known compositions of other European writers. Among these publications there were also seguidillas, tiranas and other songs written for accompaniment with the guitar.

One example of these handwritten songbooks that were played from in homes during that epoch is Ms.12534 (Staatsbibliothek, Berlin), which contains tiranas and seguidillas to be sung with guitar accompaniment, including some that originated from the tonadillas of Blas de Laserna. The seguidillas “Agitada me siento” (I feel agitated) come from the tonadilla “Di por qué, mudable suerte” (Tell me why, Fickle Fortune) which was the Madrid, 1780 debut of the singer Maria Pulpillo, the second wife of Blas de Laserna. The tonadilla “El deseo de la Pulpillo” (Pulpillo’s Desire), with the seguidillas “Mi corazón señores” (My Heart, Gentlemen), is also associated with this singer. The seguidillas “Majas de la Raboso”, on the other hand, were first sung by Maria Antonia Fernández, “La Caramba”, in the tonadilla “El majo y la italiana fingida” (The Dandy and the Fake Italian), which Blas de Laserna would refer back to years later in “La gallega seducida” (The Seduced Galician). The staged tonadilla consisted of a specialised repertoire for which performers, apart from having outstanding singing ability, also had to be able to act well. In their move to private homes, seguidillas and tiranas did not lose their theatrical character, and that evocative popular wit of the tonadilla would continue to be reinvented in the more intimate spaces of bourgeois salons.
However, with the dawn of the new century, little by little the tonadilla started yielding in popularity to, and being eclipsed by, the opera. Seguidillas and tiranas suffered the same fate, with other, more lyrical songs beginning to occupy the pages of the music books of the time. These were now no longer collections exclusively of seguidillas to be sung to the guitar, but rather contained a more varied and eclectic repertoire in line with the fashions of the moment. Conscious of changing demand, publishers of these songbooks collected songs from various composers and arranged them either for piano or for guitar, to satisfy the tastes of those who could devote their time and passion to the playing of music.

Before leaving Spain for France, Narciso Paz compiled a collection of songs with guitar accompaniment in a handwritten notebook. These included some seguidillas and patriotic marches (M/13, Library of the Royal Higher Music Conservatory of Madrid). With the War of Independence, Spain was drawn into a conflict that affected all sectors of society. During these years, patriotic songs spread tales of wartime exploits, praised national heroes, and served as propaganda for the Spanish monarchy represented by Fernando VII. Likewise, seguidillas, representing the music of tradition, became the flag-bearers of Spanish ingenuity and, along with the quintessential guitar, represented a banner with which to manifest one’s Spanishness against the foreigners. With the usual elegance and wit, the chorus of the Seguidillas of Fernando the Seventh may serve as an example of this: “Anda salero / no reinará en España / José Primero” - (“Run along, Salt Shaker / Joseph the First / will not reign in Spain”.)

The jocular tone and sharp wit of these popular verses gave way to a more refined and gentler poetry that sought to express feelings with elegance. Without ties to the theatre, lyrical songs thrived in the living room. Either singly or compiled into songbooks, these tunes filled the book stores and music shops, with new titles constantly being advertised in the press. It was an ephemeral repertoire also containing some noteworthy material: songs, which, judging by the frequency with which they were advertised, must have been quite fashionable at the time. Versions of the song La Ausencia (The Absence) by the guitarist Federico Moretti, were already in circulation in these years, before being printed in 1812 as part of his collection Doce canciones con acompañamiento de guitarra (Twelve songs with guitar accompaniment).

Little is known about the composers of these songs, as the works were not signed. Neither did composers’ names normally appear in the advertisements published by book stores – and if they did, it was by initials only. Musicians and composers created these melodies intending them to be accompanied with piano or guitar – the two harmonic instruments available in homes. In later years, once a sheet music press had become established in Spain in the 1810s, new songs appeared with parts written – along with the voice – for both guitar and piano, reaffirming the coexistence of both instruments as accompaniment in private salons, as well as contributing to the greater diffusion of a repertoire that had begun to form an important component of even the mainstream music publications.

Right from their popular origins, songs accompanied by the guitar have been part of the musical landscape of Spanish society. By crossing social barriers and serving as a common thread between different ways of living, thinking, behaving and feeling, the sound of the guitar has, over time, remained the perfect backdrop for the history of Spain and its identity as a musical nation.
Fernando Antón