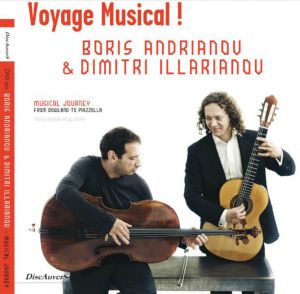 disc’auvers Records-Festival d'Auvers
3341348160122 | DAS 012 | 1CD
Boris Andrainov
Considered to be one of the most brilliant Russian musicians of his generation, Boris Andrianov is beginning his international career with appearances in some of the most prestigious venues in Europe, as well as in India, Korea, USA, China and Japan. He performs as a soloist with major orchestras such as the Mariinsky Theatre, the St Petersburg, Slovenia and Croatia Philharmonics, the National Orchestras of France and Russia, as well as the Vienna and Berlin Chamber Orchestras. Andrianov has played as soloist under the direction of such great conductors as Gergiev, Fedosseev, Petrenko, Kogan, Vedernikov, Geringas, Kofman and Mehta, and he gives chamber music recitals with Yuri Bashmet, Menahem Pressler, Janine Jansen and Julian Rachlin.

Dimitri Illarionov
Since triumphing at numerous international guitar competitions, Dmitri Illarionov has given performances in some of the most prestigious concert halls, including the Tonhalle in Switzerland and Osaka Symphony Hall in Japan. Under the direction of great conductors such as Vladimir Fédoseev, Claudio Scimone, Leo Brouwer and Dimitri Liss, he has collaborated with Russia’s top orchestra, the Tchaikovsky Orchestra, I Solisti Veneti, Moscow’s chamber orchestra «Musica viva», the Ural and Novosibirsk Philharmonics and the «New Russia» Symphony Orchestra. His disc «Classical Duo», recorded with cellist Boris Andrianov, was selected by Grammy Awards.