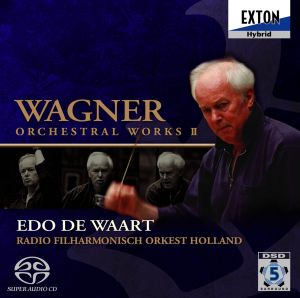 Exton
4526977001988 | OVCL 198 | 1SACD
Richard Wagner was a pioneer of the modern art of conducting, and conducted many concerts as a way of raising funds for his operatic projects (and simply to help pay off his debts). But, although at different times in his career he planned series of programmatic concert overtures and one-movement symphonies, he actually wrote remarkably little concert music. This disc contains the two most substantial concert works of his maturity, the Faust Overture and the Siegfried Idyll – the latter, however, written not for public performance but for a private family occasion (and musically related to the music-drama Siegfried). These works are complemented by two of Wagner’s early operatic overtures, and by two excerpts from his later music-dramas: so-called “bleeding chunks” of the kind which he included only reluctantly in his concert programmes, but which for many years were a staple part of the orchestral repertoire. (From the CD linernote by Anthony Burton © 2010)