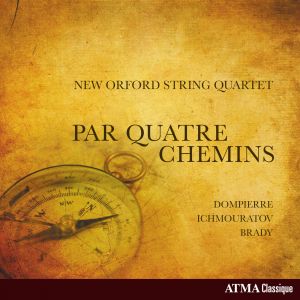 The members of the New Orford String Quartet are all former or current principal players in the Montreal, Toronto or Detroit symphony orchestras. Inspired by the success of modern chamber orchestras, these four classical music stars came together in 2009 to revolutionize the concept of string quartet playing in Canada by undertaking a limited touring schedule on a project-by-project basis.
The NOSQ promotes Canadian works by performing both new commissions and neglected repertoire from the previous century. The Quartet’s repertoire spans a period of more than 225 years and comprises works from such composers as Haydn and Beethoven to Sir Ernest MacMillan and Denis Gougeon. Each NOSQ project includes one of the major Canadian string quartet from the 20th century or the premiere of a newly composed work.
Acclaimed for their “ravishingly beautiful tone” as well as their “extraordinary technical skills and musicianship,” the members of the New Orford String Quartet (NOSQ) delve into works by three Canadian composers: François Dompierre (Par quatre chemins), Airat Ichmouratov (String Quartet No. 4, Op. 35), and Tim Brady (Journal / String Quartet No. 2).
The quartet by François Dompierre was commissioned by Jean-François Rivest when he was artistic director of the Orford Arts Centre. It was premiered by the New Orford String Quartet during the 2015 summer season.
“It has been 33 years since I composed a string quartet. So, you ask yourself, why another string quartet? Why now? The answer is very simple: The New Orford String Quartet has such amazing players that it is one of life’s simple joys to write music for them. ” – Tim Brady
Airat Ichmouratov composed his String Quartet Op.35, No. 4 (Time and Fate) in Spring 2012, after the sudden death of Eleonor Turovsky (first violinist of I Musici). Dedicated to Turovsky, the work was commissioned by the New Orford String Quartet and premiered on July 26, 2013.