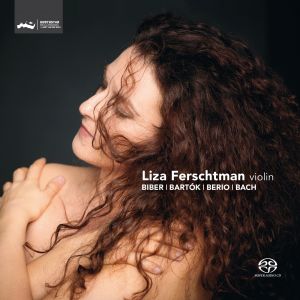 Challenge Classics
0608917263527 | CC 72635 | 1SACD
"This is an invitation: an invitation to join me in an adventure. It would normally take place in the concert hall, because the combination of pieces I’m presenting to you here is not a typical programme for a CD. It’s an overwhelming recital that demands a great deal not only from me as the musician, but also from you as the audience. When I play this recital in a concert setting, which I’ve done on many occasions, I always find it to be a battle, where I’m reaching for my own limits and for the audience’s limits. But this is a constructive battle. The battle is the pathway and at the end of it we’re in a better place. From the stage, I can take the audience by the hand as stunning beauty alternates with uncomfortable and what can even be almost ugly sounds.

These are exactly the pieces I wanted to record. This is a highly personal program. It’s a program of contradictions: the ostensible simplicity of Biber and Bach contrasting with the complexity of Bartók and Berio. It’s emotional but at the same time highly cerebral.

Bach’s Chaconne is the focal point, to which the works of Bartok and Berio make strong references , making it the core of this programme. Biber’s Passacaglia provides focus, with its persistent repeated cadence of the four falling notes. This pulse underpins the entire recital: sometimes hidden and barely audible, like a sort of primeval pulse (as in the Berio), and sometimes quite clear. Bartók’s Sonata is a real masterpiece, It’s the pinnacle of what is possible on the violin, without having virtuosity as its objective. The consonance – or actually the battle – between two notes lies at the heart of Berio’s Sequenza VIII. This also presents us with a degree of ugliness. But after the powerful confrontations, as the music gradually subsides in volume these two notes end up forming a brotherly union. The battle has led to some good after all."