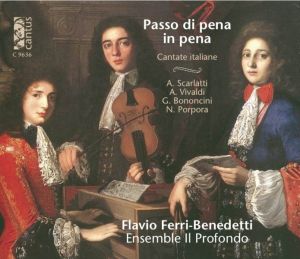 Cantus
8424619696362 | C 9636 | 1CD
The cantata da camera genre enjoyed its Golden Era in the early eighteenth century in Italy, mainly in Rome, through the auspices of employers as Cardinals Ottoboni and Pamphiliij and the Marquis Ruspoli, who organized several Accademie in their homes, weekly meetings in which music, poetry and discussions about art or philosophy attracted the most important nobles of the city. The most distinguished of these Accademie saw the presence of the great composers of the time: the newcomer Handel, Alessandro Scarlatti, Gasparini, instrumentalists as Arcangelo Corelli and Domenico, the son of Alessandro Scarlatti ... The highlight of these meetings was the time of the performance of some cantate da camera by such great personalities. The extraordinary artistic atmosphere that existed in the Accademie soon expanded to other cities in Italy and from there to the rest of Europe. Our recording aims to recreate the repertoire that was heard in these Accademie when the cantata genre had spread and had evolved, around 1730: from the wonderful style, nostalgic and always surprising of Alessandro Scarlatti to the lyricism of Bononcini, the glow and melodic treatment of the voice of Porpora or the rich sounds of Vivaldi, all seasoned with an instrumental Triosonata by Locatelli.

There are few occasions when a record producer has the great pleasure and honor to present a truly unique artist, as the Italian countertenor Flavio Ferri-Benedetti. In his recording debut, we fall in love with his beautiful voice, sensual, round and firm. He captures us with his wonderful way to say the text, to feel the emotions, with his perfectly - it could not be otherwise - shaped Italian. He gives each phrase, each word, its accurate meaning and draws from every note exactly what the listener wants to perceive, displaying an unusually brilliant technique. Flavio is joined in this extraordinary recording by the ensemble Il Profondo, a group specializing in the interpretation of the basso continuo, created by young musicians from different countries (Switzerland, France, Japan, Italy, Spain) formed in the prestigious Schola Cantorum Basiliensis. They offer a colorful accompaniment, robust, sensitive to every nuance, attentive to detail, a pleasure to the ears. Surely, all those who buy this CD will agree that they have rarely had the pleasure of listening to a countertenor recording of this technical and artistic level. We believe it will become a benchmark in the early music discography.