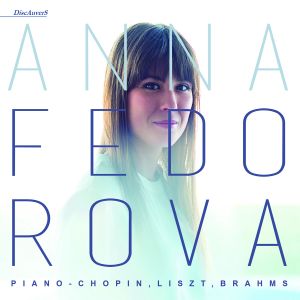 disc’auvers Records-Festival d'Auvers
3341348159768 | DAS 017 | 1CD
Anna Fedorova is one of the world's premier young pianists. From an early age, she demonstrated an innate musical maturity and outstanding technical abilities. Her international concert career took off while she was only a child, and audiences around the world were stunned by the depth and power of her musical expression. Critics have praised Anna's signature “sweet modesty and wild expression,” which rendered listeners “completely taken by surprise, compelled and astonished.”

In September 2013 Anna performed Rachmaninoff 2nd Piano Concerto at the opening of the season of Sunday Morning Concerts series at the Great hall of the Royal Concertgebouw. Within two and a half a years, the recording of this concert received over 9 million views on YouTube and was highly praised among renown musicians. In November 2015 she returned to perform in the big hall of Concertgebouw in Sunday Morning Concerts series Rachmaninoff Piano Concerto No 3, this performance was again steamed live on TV, internet and radio.

Having mastered a formidable concerto repertoire, she played with orchestras around the world, among which are The Hong Kong Philharmonic Orchestra, Yomiuri Nippon Symphony orchestra (Japan), the Dallas Symphony Orchestra, Netherlands Philharmonic Orchestra, the Orquestra Filarmonica de Buenos Aires (Argentina), the Orchestre de Chambre de Lausanne (Switzerland), the Residentie Orkest and the Camerata Amsterdam (Netherlands), the Tokyo New City Orchestra (Japan), the Philarmonia of the Nations and the Nordwestdeutsche Philharmonie (Germany), the Orquesta Sinfonica Nacional de Mexico, the Xalapa Symphony Orchestra and the OFUNAM (Mexico), the Israel Chamber Orchestra, the Polish Camerata and many others. Conductors with whom Anna has had the pleasure of performing with include Jaap Van Zweden, Jun Markl, Alun Francis, Andrew Grams, Howard Griffiths, Gerard Oskamp, Justus Franz, Kevin Griffiths, Carlos Miguel Prieto, Jerome Pillement, Shinik Hahm, Alejo Perez, Martin Panteleev, David Lockington and many others.

Anna has claimed top prizes at numerous international piano competitions, including the International Rubinstein 'In Memoriam' piano competition, the Moscow International Frederick Chopin Competition for young pianists, the Lyon Piano Competition, and recently became recipient of the Verbier Festival Academy Award. She is also two-time laureate of the Dorothy MacKenzie Artist Recognition Scholarship Award at the International Keyboards Institute & Festival (New York, USA). A graduate of the Lysenko School of Music in Kyiv (studio of Borys Fedorov), Anna is currently a student of Norma Fisher at the Royal College of Music in London, she is David Young Piano Prize Holder supported by a Soiree d’Or Award and Keyboard Trust. Additionally, Anna studies at the prestigious Accademia Pianistica in Imola, Italy under professor Leonid Margarius. She has also received artistic guidance from world renowned pianists such as Alfred Brendel and Menahem Pressler, and is regularly mentored by Steven Isserlis and Andras Schiff.

In autumn 2014 Anna’s first two albums were released - Solo CD with works by Brahms, Liszt and Chopin under DiscAnnecy Label and the Rachmaninoff CD with Piano Classics. Summer 2016is marked for Anna with release of 3 more albums - with Rachmaninoff 3rd piano Concerto and Mussorgsky “Pictures at an Exhibition”, and two duo CDs are - with german Cellist Benedict Kloeckner and works of Chopin and Frank, and with turkish cellist Jamal Aliyev and works by Russian composers.

Highlights of Anna’s future engagements include performances with the Royal Philharmonic Orchestra in Cadogan hall in London, Orchestre Lamoureux in the Theatre des Champs Elysees, Bournemouth Symphony Orchestra (UK), Orchestra Simfonica Siciliana, the Nordwestdeutsche Philharmonie and many others. She will perform in such prestigious concert halls as the Amsterdam Concertgebouw, Vancouver Playhouse, The Norwegian Opera and ballet in Oslo, Theatre des Champs Elysees, Louis Vuitton Series in Paris and many others. In the 2015-2016 Anna was the artist in residence in Edeshe Concert hall in Ede, Netherlnds. In May 2017 there is going to be the first edition of International Chamber Music Festival Ede, where she is going to be artistic director.