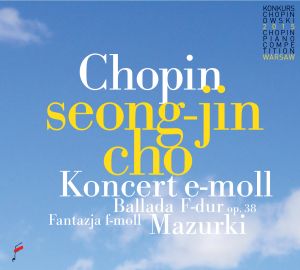 Fryderyk Chopin Institute
5907690736903 | NIFCCD 625 | 1CD
When does an eventual competition winner emerge as the leading contender from a pack of around 80 contestants? Seong-Jin Cho arrived at the 17th International Fryderyk Piano Competition with something of a prizewinning streak, since he had already enjoyed success at both the Rubinstein and Tchaikovsky Competitions in 2014 and 2011 respectively. Although his was not the first name on everyone’s lips during the long and tense wait for the final results, few were surprised when the announcement was made and he became South Korea’s first gold medalist in the history of the competition. His playing throughout each stage had been unfailingly cultivated, his sound always beautifully focused and poised.
These qualities had indeed singled him out for attention right from the beginning of the competition. Reporting on one of the First Stage sessions for the Chopin Courier, Andrzej Sulek noted that ‘Seong-Jin Cho brought a clear jump in quality relative to those before him: he revealed himself to be a refined, intelligent pianist’. He also made a comparison with one of the greatest of all Warsaw winners when he singled out a short piece for special comment: ‘The Etude in C major from Op. 10 was worthy of the model created by Pollini’. By the start of the Third Stage, Sulek was still able to claim that ‘the best impression was made by Cho. This is a monolithic personality, a proper pianist, in perfect control of the instrument, almost flawlessly precise’.
This recording traces the pianist through all stages of the competition. A pair of Etudes were a requirement in the First Stage, and Cho elected to play Nos 1 and 10 from Op. 10. Conceived as a demonstration of the new possibilities of 19th-century virtuosity, Chopin’s Etudes also represent an artistic ennoblement of that style: whatever their title may say, they are about far more that just technique. Published in Paris in 1833 but written between 1829 and 1832, the Op. 10 set opens with a C major piece characterised by wide arpeggios; the A flat piece is outwardly simple in its construction but complex in the demands it makes in terms of accents and phrasing.
He captured unequivocally the brilliance of the Concerto in E minor, Op. 11, a work that dazzles with the youthful spirit of a composer who completed it in August 1830, just three months before his departure from Warsaw. From the moment of piano’s entry with fortissimo octaves, attention is focused on the soloist, and Cho proved that he deserved that limelight. Scarcely older than Chopin was when he composed it, the winner gave an interview in which he touchingly said, ‘My greatest dream is to concertise until I die, to appear on stage even when I am an old man’. Thanks to the power of the Chopin Competition, that dream may come true.