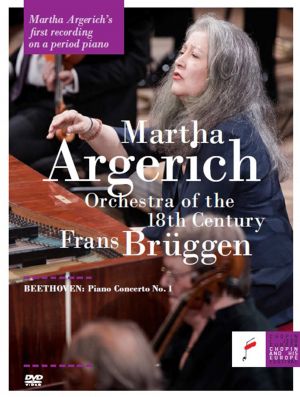 Fryderyk Chopin Institute
5907690736644 | NIFCDVD 004 | 1DVD
The world’s first recording on historical instruments of Ludwig van Beethoven’s Piano Concerto no., featuring a sensational performance given by Martha Argerich with the Orchestra of the 18th Century under the baton of Frans Brueggen, during the “Chopin and his Europe” festival.
The Concerto no.1 in C major, dedicated by Beethoven to his pupil Babette von Keglevics is often dubbed a Mozartean work. No doubt there is much to support this designation and it might not even be unjustified to point to a specific prototype. The work in question is Mozart’s Piano Concerto in C major, K.503, which at that time was rather neglected, but was highly valued by Beethoven’s friend Johann Hummel. However in his opus 15 Beethoven departs from the spirit of Mozart: he expands the dimension of the work elaborating much more the so-called development part.
It would be hard to imagine a more intimate contact with a musical work than in the case of Martha Argerich and Beethoven’s Piano Concerto no.1. She first played this work in public aged barely seven. Subsequently she played it countless times, becoming a flagship work for the brilliant pianist. Yet, this DVD recording is the first made on a period instrument by the empress of the world pianism.
The film The Breath of the Orchestra, shot during the 9th International Music Festival ‘Chopin and his Europe’ in 2013, represents an attempt to create an intimate portrait of one of the greatest phenomena of the global music scene, the Orchestra of the 18th Century. It’s a very special film of both documentary and emotional value. Pieced together from conversation with Frans Brueggen, Sieuwert Verster (managing director) and musicians who have belonged to the orchestra during the years, as well as recordings from rehearsals and concerts, it conveys the unique ambiance of the work and friendship of this exceptional group of people, bound by their passion and joy in experiencing music together.