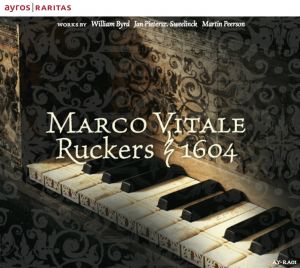 The virginal is a keyboard instrument with plucked strings, as in a harpsichord but usually smaller, oblong in shape, normally with only one set of strings which run parallel to the keyboard.

This keyboard instrument was called different names in various countries at different periods. The virginal recorded in this CD, or spinet to be more historically correct, was built in Antwerp in the workshop of the brothers Joannes and Andreas Ruckers. The date 1604 can be found among the painted decoration on its soundboard. The original signature has been lost together with the jack rail and rose but, from the style of this painted decoration, we can be sure that it is typical of the early period of the instruments signed by Joannes Ruckers.

The Ruckers 1604 spinet, discovered in central Italy around the year 2000, now occupies a unique place among our musical heritage, as it is the only 6 foot Ruckers spinet restored to its original sounding condition. It enables us to open a window to the once lost sound world of a glorious and unrepeatable moment in our music tradition and history.