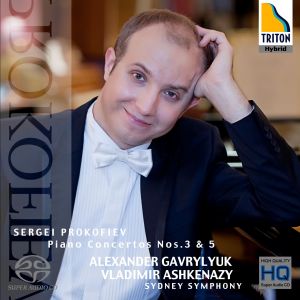 "Prokofiev's first, third and fifth piano concertos are some of the most ferociously taxing in the repertory. Gavrylyuk easily surmounted their challenges with a seductive mixture of brilliance and sensitivity. Relentless torrents of notes and chords were not only dispatched with stunning speed, power, clarity and precision. They were also shaped with purpose and insight. By contrast, Gavrylyuk's deft lightness of touch, rhythmic alertness, and tonal variety (sparklingly bright in faster passages; warmly refined in slower, softer sections) captured Prokofiev's trademark moments of wistful introspection and mercurial playfulness."- The Australian about the performance in the concerts/live recordings for this cd