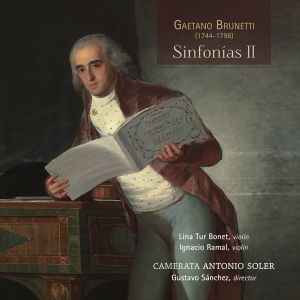 Lindoro
8436003830337 | NL 3033 | 1CD
Gaetano Brunetti (1744-1798) was, along with Luigi Boccherini, the main composer of sympho- nies during Spain ́s Classical period –both because of the quantity of his work and its diversity. Other composers active in Spain in the second half of the eighteenth century were not at the level of the work of the two Italians, although we know of a fair number that wrote symphonies, generally with a religious background. Central European and French symphonic music was freely available, at least in Madrid, and the works of the leading composers of the era were known and performed at the Spanish Court. Names like Haydn, Gossec, Pleyel, Mozart, Wranitzky, Eichner and Rosetti (Anton Rössler) appear on invoices for music purchased or copied for the Spanish court music service, although the composer that stands out above all others is Brunetti. Other composers of symphonies in Spain at the end of the century were Baguer, Garay and Pla, to name but a few among the long list of writers who have been documented, although they are not well known yet.
However, the output of the above-mentioned composers can not be compared with that of Boccherini (29 symphonies) or Brunetti (41 symphonies, two of which remain untraced), both serving the Spanish court and, in the case of Boccherini, also the Prussian one from 1786 onwards. The reason is not difficult to understand:
while most composers did not write instrumental music full time, Brunetti and Boccherini were paid to do so by their employers. Thus, their symphonies were not written with the intention of staging concerts for the public or for the publishing industry, but rather for private enjoyment in a courtly environment. In Spain during that era, conditions were not really favourable for symphonies to flourish; whatever small audience existed had to make do with the works of foreign authors, which were in circulation as imported editions or manuscript copies.
Among Brunetti ́s output there are six early works written in 1772, in three movements, that he called overtures. After these overtures, the rest of his symphonies were created with an appreciable unity of purpose: all have four move- ments (some also feature a slow introduction), a quintet of wind instruments normally replaces the traditional minuet, and the orchestra usually comprises the string section, a bassoon and pairs of oboes and horns. Sometimes a timbale or bugles (clarines) are added, and in his later works Brunetti also introduced a second bassoon. In reality, the symphonies of Boccherini and Brunetti would often have been performed with a small group of instruments, as would be the case with the orchestra that the Countess-Duchess of Benavente Osuna kept at her residence, or with those at Madrid theatres.                     And indeed, there is no need for a large ensemble of musicians or a so-called “classical” orchestra to interpret these works, because it is likely that they were con- ceived from the outset for 12-15 instruments.
Gaetano Brunetti ́s activity as a symphonist seems to be compressed into just a few years, to the extent that the golden age of the symphony at the Spanish court would have coincided with the last decade of the reign of Carlos III. In the body of work of the composer there are periods in which particular aspects of his oeuvre are particularly prominent: the repertoire of the years 1760-1782 consists almost exclusively of sonatas, trios and quartets, whereas from 1772 onwards and under patronage of the Prince of Asturias symphonies become more prominent, and practically dominant after 1779. This tells us that Brunetti wrote his symphonies mainly for the Prince of Asturias; after the latter’s ascent to the Spanish throne in late 1788 as Carlos IV the composer would only write six more works for him. Apparently the new monarch lost his fondness for symphonies, and after experiencing a passing attraction for Italian opera, started showing a decided preference for quintets with two violas, which –together with the gradu- al introduction of piano music– characterised Brunetti’s repertoire from 1792 until his death in 1798.
Brunetti actually wrote symphonies through- out his career: the first one dates from 1769, and the last from 1794. However, a full 29 of them appeared in the 1780s. For reasons that can only be guessed at, the writing of his symphonies seems to be concentrated around the year 1783: no less than 23 works, 7 of which have a score dated with that particular year. This also applies to Symphony No. 25, and probably to No. 8 (although for lack of the original manuscript, its date is presumed to be 1783-1786). The Sinfonia Concertante No. 3, meanwhile, dates from 1784- 1786. Despite this high level of output, Brunetti –just like Haydn– had no choice but to be origi- nal when creating his music; however, being an instrumentalist first and composer second, he translated his experience as a violinist to composition, while at the same time revealing a great talent as an orchestrator. His creativity and inventiveness are noticeable in the symphonies included in this recording, which the listener will perceive as undoubtedly “classical”.