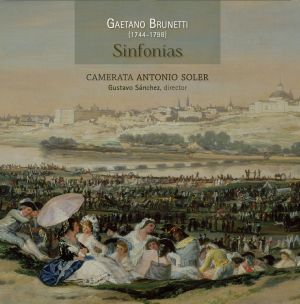 Lindoro
8436003830269 | NL 3026 | 1CD
Gaetano Brunetti (1743-1798) was, along with Luigi Boccherini, the leading composer of chamber music in Spain in the last third of the eighteenth century. He was of Italian origin and served the Spanish crown since 1768. His presence in Madrid can first be documented in 1762, when he appears as a member of the orchestra in the Teatro (coliseo) de la Cruz, and also wrote music for the comedy of García del Castañal. Since 1770, as a violin teacher to the Prince of Asturias, the future Carlos IV, Brunetti served as composer for the court for 28 years, thus becoming the main author of symphonies in Spain. However, just as the rest of his pieces, none of them were meant for public concerts or for the publishing industry, since they were meant to be performed privately in the halls of the Palace, as “chamber” music.
Brunetti wrote at least 40 symphonies, of which the first six correspond to the model of the overture in three movements. He also wrote four concertante symphonies as well as an interesting “character symphony”, Il Maniatico, in which a character is represented by a cello-soloist throughout the entire piece. Compared to other composers of the time, the only one with a comparable orchestral production would be Luigi Boccherini, with 28 symphonies or similar works. Most of Brunetti´s symphonic oeuvre was composed between 1769 and 1788, the latter being the year when King Carlos III died and the Prince of Asturias was crowned Carlos IV. In fact, 34 out of his 40 symphonies, including the three presented in this recording, were written during this period (1783-1786).
Probably, the most remarkable feature in his symphonies (excluding the overtures and the concertante symphonies) could be the use of a “quinteto” in the third movement, instead of the most common minuet-trio pattern. This feature makes them easily recognizable as “Brunetti symphonies”, since it constitutes a rare exception to the rule of introducing a ternary movement which could contrast with the other movements in rythm, tempo and character. In fact, the composer reinterprets the idea of using a dance pair (the minuet with its trio, characteristic of the quartet or the clasic symphony), since he prefers to use contredanses or other type of tune in 2/4 measure. Furthermore, the first section is scored for a wind quintet (hence the origin of its name), while in the second only uses string instruments, so that there is always a timbre contrast between both sections. There are only two exceptions to this rule: the Symphony No. 13, where the quintet is written in 3/8 and is a “taich”, a popular dance from Central Europe; and the Symphony No. 30, with a “Tempo de minuetto” and its trio.