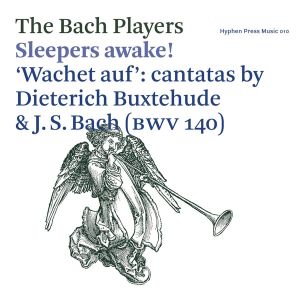 Hyphen Press Music
5060184830096 | HPM 010 | 1CD
Behind J.S. Bach stood Dieterich Buxtehude, the pre-eminent German composer of the seventeenth century. The two are reunited here in their settings of the text ‘Wachet auf’ – sleepers awake! The text of this cantata tells the story of the wise and foolish virgins, used in the Lutheran calendar for the 27th Sunday after Trinity, which falls just before Advent, when this CD will be released. The CD also serves as a small anthology of works by Buxtehude: in addition to the two cantatas, there is his glorious chaconne-form aria ‘Quemadmodum desiderat cervus’, and a trio sonata.

Bach’s ‘Wachet auf’, with its heart-stirring opening movement and touching dialogues of soprano and bass, provides the culmination of the programme.

Bach’s score specifies a piccolo violin, and the use of this rare instrument suggested another piece here: a sonata by Erlebach for piccolo violin and viola da gamba.