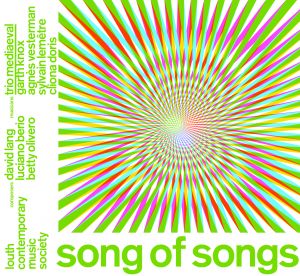 The writer Paul Griffiths in his booklet notes of this remarkable recording says "The Song of Songs is the dancer in the temple, the sensualist’s page tucked into the holy book, a love song accepted as scriptural in Jewish and Christian traditions from times before reckoning. It is a song of mutual adoration, voiced by two people— though their voices are not distinguished in the text, perhaps, in the ecstasy of this shining, blazing regard that each fixes on the other, that holds them face to face, they are one. “Let him kiss me with the kisses of his mouth!” the song begins, “For your love is better than wine; your anointing oils are fragrant; your name is oil poured out.”

The brilliant Norwegian Trio Mediaeval collaborate with Garth Knox, Agnes Vèsterman, Sylvain Lemêtre along with Cliona Doris harpist, for the first time to record the new compositions. The record stems from a Louth Contemporary Music Society concert performance in October 2014 where both composers, Lang and Olivero attended the performance and recording session.

The new compositions, both Louth Contemporary Music Society commissions, Lang’s just (after song of songs) and Olivero’s En La Mar Hai Una Torre (In the sea there is a lighthouse) are lyrical yet beautiful contemporary spiritual works that are breathtaking from start to finish. Lang’s just (after song of songs) features in the new Paolo Sorrentino film Youth. The recording also features Garth Knox performing Berio’s Naturale which is apt considering Berio was one of Olivero’s most important teachers.
This is must have recording.