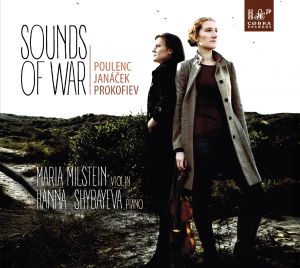 Cobra
8713897903706 | COBRA 0045 | 1CD
The Sonatas recorded on this CD are united by the circumstances which brought them to life – each of these works was composed during wartime.  For composers, artistic creation in times of war appears as a necessity, a cry for help and a call to humanity. In their music one can hear the acute urgency of someone whose world is being torn apart and whose life is under threat. Creating during the major conflicts of the previous century, the artists  experienced and expressed this distress in many different ways - from direct, descriptive depictions of war horror to nostalgic recollections of quieter past times or even “escape worlds”. As performers, Maria Milstein and Hanna Shybayeva found it fascinating to bring together three very different composers, each reflecting the surrounding turmoil in their own way and musical language.

Francis Poulenc dedicated his Violin Sonata to the memory of the Spanish poet Federico Garcia Lorca, executed in 1938 during the Spanish Civil War. Poulenc was a great admirer of Lorca, with whom he shared his sympathy for the socialist cause, as well as the difficulties of homosexuality in the 20th century. Pressed by the violinist Ginette Neveu to write a violin sonata (after several unsuccessful attempts in earlier years), Poulenc completed a first version in 1943. He later described this work in an interview: "Having always wished to dedicate a work to the memory of Lorca, [...] I was inspired by one of his most celebrated verses: "The guitar makes dreams cry". At first I composed a sort of vaguely Spanish Andante-cantilène. Then, I imagined as a finale, a Presto tragico of which the rhythmic and vital spirit would suddenly be broken by a slow and tragic coda. An impetuous first movement must set the mood." The Sonata opens indeed impetuously with an Allegro con fuoco, in which violin and piano seem to argue with each other. This quarreling switches rather suddenly to lyrical passages where one hears Poulenc's affinity with light music (reminiscent of French "chansonniers"). The Intermezzo is the heart of the Sonata with its unmistakable Spanish flavor and its languor, the guitar imitation in the broken chords of the piano obviously referring to the quote from Lorca. The Presto tragico seems by contrast to burst with fierce energy; with its sudden mood changes, the music runs frantically forward, culminating with a quote from the first movement, this time in triumphant major, before breaking abruptly into the coda, slow and desolate. Poulenc wasn't satisfied with the Sonata, revising the finale in 1949, and considering it a failure. This opinion proved to be unjust; the Violin Sonata has since enjoyed numerous performances and has moved many audiences worldwide.

“In the 1914 Sonata for violin and piano I could just about hear the sound of the steel clashing in my troubled head.” These words of Leoš Janáček give a vivid image of the tormented music of the Violin Sonata, a work which he began composing at the outbreak of World War I and completed only in 1921. The first movement opens with an out-bursting cadenza of the violin which throws the listener into the main theme - an anguished, weeping melody at the violin which is juxtaposed with the violent, "inhuman" tremolos in the piano. This juxtaposition that frequently occurs in the work, notably in the Allegretto and the finale, seems to depict the opposition between the individual and the dehumanization of war. After this brutal beginning the theme reappears at the piano in a suddenly calm, distant mood, as a cold observation of the previous turmoil. The movement then unfolds with brutal contrasts of agitation, sudden calm and bitter lyricism, conveying the feeling of an utter inner distress. The second movement, Ballada, breaks with the preceding madness, displaying one of Janáček's most lyrical and touching themes evoking a fairy tale world. However, the nostalgic beauty of the tune is undermined as the movement develops and a sense of anguish is returning in the increasingly menacing accompaniment, culminating in a rhapsodic outburst of the violin. Eventually the dreamy tune of the beginning comes back, albeit more fragile and uncertain. The Allegretto opens with a simple folk-like tune in the piano part (very similar to the theme of the Fate from Janáček's opera Káťa Kabanová), fiercely interrupted by the violin. The ensuing fight between piano and violin ends abruptly with three violent chords. The middle section provides again a sharp contrast, with its bitter lyricism and hesitation. The folk-like tune returns shyly in the violin, before resuming the fight of the beginning. The finale, a dark Adagio, opposes again violin and piano. The sorrowful motive at the piano is savagely interrupted by the violin with ferocious exclamations. After the short relief of a fresh, childlike second theme (which echoes the Ballada), the opposition returns again with escalating passion, culminating in the fierce statement of the opening motive in the violin against the wild tremolos of the piano - echoing the first movement. After this outburst of madness the sorrowful calm of the beginning returns, this time interrupted by whispers of the violin, closing the work in muted despair.

Sergei Prokofiev started to compose his First Violin Sonata as early as 1938 and completed it in 1946, one year after the end of World War II. Surprisingly enough this Sonata, despite its dark and ferocious character, is less directly linked with the war than the Sonatas of Poulenc and Janáček. The impetus should be seen in the growing feeling of fear which dominated during the years of Stalin's repression (especially in the second half of the 1930's). Several friends and colleagues of Prokofiev suddenly vanished, arrested by the NKVD under the typical charge of "enemy of the people", while the composer and his family were under close watch of the government. Prokofiev struggled with the composition of this Sonata. During the war years he revised the first and second movements and completed the third and fourth, dedicating the work to the violinist David Oistrakh, a close friend and champion of his works.
The first movement opens with a dark motive in the low register of the piano. The movement unfolds with the violin joining in, and reaches a first climax before retreating into a mournful repeating motive of the violin, while the piano enunciates the opening motive with growing violence. After the second climax the theme returns, for the first time in the violin, followed by one of the most significant places of the work, which Prokofiev himself wanted to sound "like the wind in a graveyard" - soft rushing scale passages of the violin above bell-like chords of the piano, sounding like church bells in the distance.
The second movement, Allegro brusco, bursts out with violent repeated notes of both instruments, and maintains its ferocious character until the end, only briefly giving place to a hesitant, tortured middle section. The third movement contrasts hugely with the roughness of the previous movement, displaying Prokofiev's poignant lyricism at its best, with its regretful opening theme played by a muted violin, and the mysterious middle section, which seems to come from a phantasmagorical world. However, the end of the movement brings reality back, with terse chords of the piano (perhaps a reference to the bells) and repeated rough notes of the violin, which slowly dissolve into
whispering tremolos. The finale, Allegrissimo, starts with a seemingly joyful, dancing tune, but the inner violence and anger very soon come to the fore. After a short interlude of stunning naivety and playfulness, the opening tune hesitantly comes back, and slowly grows in intensity and brutality, finally leading to the Sonata's climax, where the scale passages of the first movement burst out in fortissimo above the bell-like chords of the piano, now at their maximal intensity. The climax is followed by a literal return of the wind-like passage from the first movement, and the Sonata ends with the return of the "naive" motive from the interlude, now transformed into a grim conclusion.