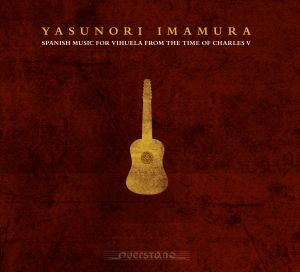 Spanish Music for Vihuela from the times of Charles V

Querstand
4025796013184 | VKJK 1318 | 1CD
The vihuela is a guitar-shaped plucked string instrument that was used widely in the Iberian Peninsula and other Spanish-speaking regions in the 15th and 16th centuries. The widely renowned lute virtuoso Yasunori Imamura presents at this CD not only the result of his intense study of the history and techniques of the fascinating instrument, but also a representative overview of the rich and multifaceted literature composed for vihuela within the 16th and 17th century around the Spanigh court. From there the instrument began ist temporary triumph in several spheres of the globe. Most of the vihuela compositions known today are part of at least seven collections published in the 16th century. Selected works from three of those are presented on the disc - by Milán, Narváez and Mudarra. Besides this sort of literature there have been discovered several manuscripts. Which makes at least a repertoire of about 900 compositions. Thus, there have been choosen several manuscripts accomplishing the image given here.
It appears as suprising, that none of the surviving vihuelas is to be found in Spain. Of these four surviving instruments, one is in the Musée Jacquemart-André in Paris; one was discovered in a Jesuit church in Quito, Ecuador; one is owned by the Musée de la Musique in Paris; and one, built by Belchior Dias (Lisbon, 1581), is owned by the Royal College of Music in London. For this CD, Yasunori Imamura is playing a reconstruction by José Miguel Moreno, Madrid, dating from 2012