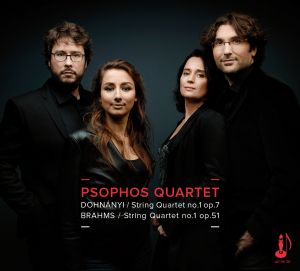 ‘One of the finest young string formations in Europe’’, according to The Times, the Quatuor Psophos is most certainly a key player on the European musical scene. Following the example of the Quatuor Ysaÿe, its elders and teachers, in 2009 the Quatuor Psophos welcomed two new members, Eric Lacrouts (violin) and Guillaume Martigné (cello). This change proved to be an enriching experience in both human and musical terms. The balance provided by these new forces gives the ensemble a serenity that perpetuates its maturity and its high standards.

After exploring various styles in the string quartet repertory over the past fifteen years, we wished to revisit German Romanticism with Brahms’s First Quartet. We chose this major work for its richness of timbre and its stylistic profundity. This quartet taught us a great deal and enabled us significantly to develop our sound aesthetic.
We chose to set alongside this imposing musical figure an unjustly neglected composer who deserves to be restored to the limelight, Ernő Dohnányi (1877- 1960). At the start of his career this young Hungarian received the support of Brahms, who recognised his undeniable qualities. In the quartet recorded here, Dohnányi skilfully combined Romantic lyricism with the colours of folk music, like Brahms himself who was also very fond of music of popular origins.
To bring together these two First Quartets composed twenty-six years apart is to underline the filiation between their composers and the importance of interconnections in musical history. Music is passed on and developed from one generation to another, and this disc testifies to that heritage.