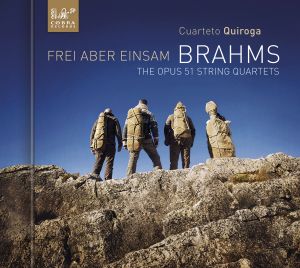 This CD is not only a recording, it is the story of a fascinating journey. The solitary journey of a man who was able to preserve his identity and his artistic freedom bringing string quartet as genre, after a very difficult pilgrimage of struggle,  to a summit from which one may behold the heritage of Beethoven, Mozart and Haydn –whose manuscripts of the Opus 20 string quartets belonged to Brahms’ private library– , the background of the german folk music tradition and also envisage the extraordinary (r)evolution of the second viennese school.

"Frei aber Einsam – ‘free but lonely’ – was the motto Brahms shared with his good friend Joseph Joachim and it forms the motivic basis of all the movements of his second quartet: the first letter of each German word represents a musical note (F-A-E).  The inherent melancholic character of this motto can often be found within his music. Brahms identified with it deeply, having fought virtually alone in defence of his work, his aesthetic conception and his chamber music. To the end, he remained true to himself refusing any path marked by fads and trends that might have impinged upon his freedom and independence. Never once did he regret his position despite the suffering that it caused him. In his own words: “For me F.A.E. (Frei aber Einsam) has remained a symbol and in spite of everything, I may very well bless it.”

Today we are able to appreciate the significant role that Brahms played in the evolution of Western music; he was able to take over from the First Viennese School at a very difficult time preserving its form and establishing, without knowing it, a link to the avant-guarde of the Second Viennese School. Starting from Brahms' motivic development (or 'developing variation) and combining classical structures together with the new harmonies fo Post-Romanticism, Arnold Schonberg would solve this war of romantics, drinking from both cups, to distill his own new aesthetic conception.
The path initiated by Joseph Haydn could not be understood today without the existence of a composer capable of creating a nexus between the classical Viennese tradition and the 'new music' led by Schonberg and his contempories.
Born out of German folksong and nurtured by it, Brahms' music possesses the quality of being universal. By masterfully constructing the form beneath a highly compressed motivic thread based on just a few notes, he manages to combine the simplicity of a traditional melody with highly cultured and complex writing without affecting perception or emotional understanding.