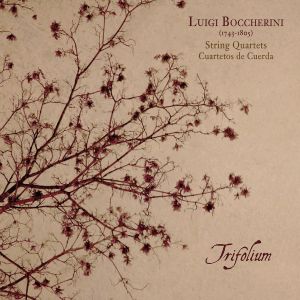 This recording allows us to dispel the myth of Luigi Boccherini (Lucca, 1743 - Madrid, 1805) as a composer of light, gallant or even superficial works, and introduces us to deeper facets of his writing, aligned with the Central European Sturm und Drang aesthetic and musical currents.

Luigi Boccherini is a pivotal, albeit controversial, figure in Spanish music history. On the one hand, his birth in Lucca in Italy marginalised him from the discourses with a nationalist tinge expounded by Spanish musicologists of the late nineteenth and twentieth centuries, despite the fact that most of his life and career were spent under the wing of Spanish institutions. What is more, the supposed Italian invasion that “contaminated” Spanish music throughout the eighteenth century also made him an uncomfortable figure to tackle. At the same time, traditional historiography has considered Joseph Haydn (1732-1809) the “inventor” of two instrumental genres of great importance in all later European music: the symphony and the string quartet. This supposed invention, which in reality consisted of the adoption of the local Viennese style as a universal (European) model of composition, helped to establish a German-centric canon that considered all other composing traditions, like the Italian-Spanish style of Boccherini, as inferior. Popular knowledge of Boccherini’s music usually goes no further than the celebrated minuet of his String Quintet in E Major (G. 275) and his quintet La Musica Notturna delle strade di Madrid (G. 324). These pieces have portrayed the composer as light-hearted and superficial. Fortunately, many musicologists have studied various aspects of the life and work of Boccherini, offering a revised image of the composer. This historiographical revision, together with the elaboration of the definitive edition of his works, brings evidence of the high quality and depth of his music and contradicts the idea of the isolation that Boccherini supposedly suffered in Spain.