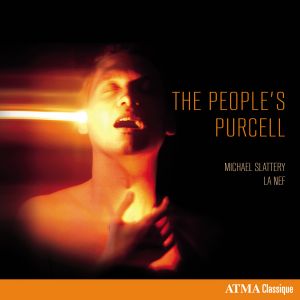 Atma Classique
0722056272629 | ACD 22726 | 1CD
The People’s Purcell reunites tenor Michael Slattery and La Nef to perform some of the most beautiful music by Henry Purcell (1659-1695).
Though grounded in the baroque tradition, the vast body of work by Purcell is fertile ground for musical explorations. The People’s Purcell invites listeners to hear this music in a new way.

As with their previous album, Dowland in Dublin (ACD2 2650), La Nef and Michael Slattery take inspired creative liberties with Purcell’s music. “Over time, I have learned to hear the profundity in the subtleties as well as the sheer variety of Purcell’s musical language, each time with renewed pleasure. With this album, we invite listeners to discover Purcell in a light that we believe he would have appreciated,” says Sylvain Bergeron, Artistic Director of La Nef.