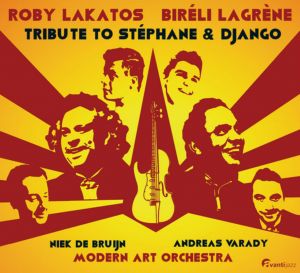 For the first time on record/video "The fastest-fingered fiddler in the world” Roby Lakatos is joined by “speed demon” guitar hero Biréli Lagrène for a unique tribute to Stéphane Grappelli and Django Reinhardt.

Both musicians performed in their youth with Stephane Grappelli. For this album they surrounded themselves with the superlative big band of the Modern Art Orchestra and by two first rate Jazzmen of the younger generation: thrilling drummer Niek de Bruijn and guitar sensation Andreas Varady. This is an explosive tribute to Manouche Jazz with standards such as “Djangology”, “Nuages”, “Stella by Starlight” and “Nuits de Saint-Germain-Des-Près”.