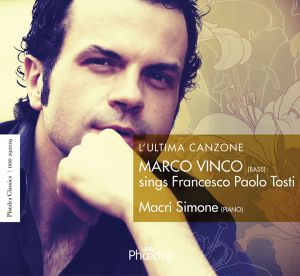 The young Italian bass Marco Vinco from Verona s known throughout the world for his vivid and powerful performance. He has rapidly established an international career, performing regulary on some of the world's most prestigious concert stages and opera houses: ROH Covent Garden in London, Opéra national in Paris, Teatro alla Scala, Teatro Real in Madrid, Liceu in Barcelona, Deutsche Oper in Berlin, Salzburg Festival, Edinburgh Festival, etc, etc. In the 2013–14 season he made his company debut with New National Theatre of Tokyo as Figaro in M z s Le nozze di Figaro.

Marco Vinco was born in Verona in 1977. He obtained his law degree in 2002, and in the meantime he studied singing with Ivo Vinco, graduating with full marks at the Lucio Campiani conservatory of Mantua.

Francesco Sanvitale, one of the most important specialists on Tosti’s music, writes:
“Francesco Paolo Tosti had the great merit of redeeming the operatic mortgage that lay on the Italian romance. In Tosti’s romances, the exuberance of the Italian vocal style is combined with simplicity of the melodic line, which perfectly adheres to the poetic text and thus makes for a brilliant balance, in which there is no place for preciosity and which is unburdened by any useless inessentials.”
Listening to these romances reminds one of a kind of bygone romanticism, lost in the mists of time and nearly forgotten. But the lightness and directness which the composer hoped to communicate to his public is unmistakable. It is the same sensation that comes over one who contemplates a painting by Monet.