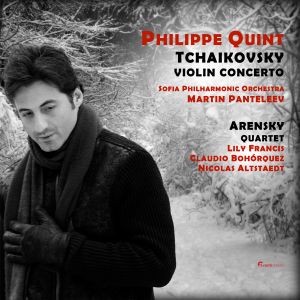 Avanti
5414706104323 | AVANTI 10432 | 1SACD
Celebrated American violinist Philippe Quint is back with an outstanding new release in a unique pairing of Tchaikovsky's popular Violin Concerto in D major, Op. 35 together with Arensky’s seldom recorded String Quartet No. 2 in A minor, Op. 35 dedicated to the memory of Tchaikovsky.

To bring out the necessary tonal palette of this masterpiece, Philippe Quint is supported by the superb Slavic blend of the Sofia Philharmonic Orchestra masterfully led by Martin Panteleev and recorded in surround sound by avanticlassic’s team. Included as a bonus track in this edition, the third movement is recorded twice: once in Tchaikovsky’s original score and once in the controversially condensed version by Leopold Auer.

The String Quartet No. 2 in A minor, Op. 35, for violin, viola and two cellos benefits from an incredible line-up of internationally acclaimed soloists. Winner of the first Pablo Casals Competition - cellist Claudio Bohórquez, a recent BBC’s New Generation Artist - cellist Nicolas Altstaedt  and the winner of the Borletti-Buitoni Trust Award as member of the Aronowitz Ensemble - violist Lily Francis.