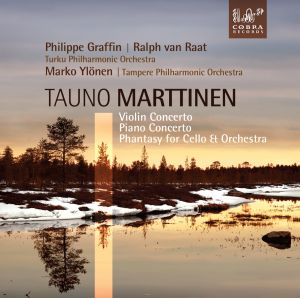 Cobra
8713897903461 | COBRA 0041 | 1CD
“I have written music from my heart and if performers will perform it from theirs, the performance will be successful” -Tauno Marttinen

Tauno Marttinen’s life encompassed almost all of the 20th century. Living from 1912 to 2008, he lived to be nearly 96 years old. He was born in Helsinki and studied in Viipuri, which was then one of the most important and vital towns of Finland. As a young man he played the piano in restaurants and places of entertainment; he also wrote and arranged Finnish tangos, a.o. for the Finnish tango-singer Olavi Virta (1915-1972), who would later become very famous.

During the early decades as a composer he wrote in a romantic idiom. In the middle of the 50s he left this behind and became one of the leading composers of Finnish modernism.

“In the early sixties we were all influenced by Schönberg, whether we liked it or not. For many, however, this method of composition became overwhelmingly mathematical and abstract, without feeling, spirituality and freedom,” Marttinen states.
Freedom was of the utmost importance to Tauno Marttinen. He viewed dodecaphonic music as a headlong rush from the rules that govern classical music. In turn, the consequence for him was that this twelve-tone principle should never be allowed to rule music mathematically, because this would rule out freedom.