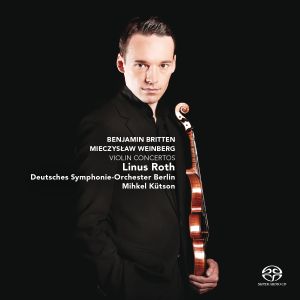 Benjamin Britten is best known for his operas and vocal music. But amid his output are also eight concertos, only one of them famous. In 1938 he wrote his Piano Concerto. The concerto was his last major work before shipping himself and his partner Peter Pears to
America where his first composition upon arrival was the Violin Concerto op.15. He finished it in September 1939. Of all his attempts at the concerto form, only the Violin Concerto has attained international fame and repertoire-status. Joan Chissell has called the Violin Concerto a work of “searching idiom, solid substance, and serious intent…” although “two of the three movements are completely dispassionate and extrovert in kind” without any “heart-felt appeal to the listener’s emotions [until the final passacaglia].” Britten took a good deal of the inspiration, if not outright quotes or technical means, for his concerto from Alban Berg’s Violin Concerto that Britten had heard in Barcelona in 1936.

Weinberg’s relationship with Shostakovich developed to a point where the closeness might even hurt his reputation when Weinberg is merely seen as a lesser Shostakovich, a darker, grim copy of the famous original. But Weinberg is neither lesser nor did he, though younger, copy Shostakovich any more than Shostakovich allowed himself to be influenced by Weinberg. The more one gets to
know the ‘junior partner’ of this twosome, the richer a picture emerges. Talking about this 1959 concerto, written for and dedicated to Leonid Kogan, Shostakovich remarked that he was “very impressed with [this] magnificent work. And I choose my words advisedly”. As the work will hopefully, surely gain in popularity, posterity will at last be able to confirm that Shostakovich was not exaggerating. Weinberg composed a masterpiece anything—famous or not—the century has to offer in the genre. With its affirmative power and irresistible drive from the first percussion crack of the Allegro molto to the last diminishing violin chord (ushered out by the horns in triple-pianissimo), it has a real chance of breaking into the phalanx of repertoire pieces, while the non-stop virtuosity
demanded of the soloist ought to delight and challenge any curious violinist.